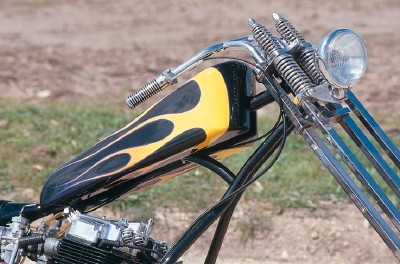 The Beast is a custom Honda motorcycle built by Lowriders by Summers/Slicks Choppers. Below are more pictures and details of this powerful chopper.

The Beast's long tank was specially made to cover the radically stretched top tube of the custom-built frame. It’s dressed in period flames.

At the time of its introduction, Honda’s 750-cc inline four was among the most potent motorcycle engines available, and velvety smooth to boot; as such, it was a natural for customizers. The Beast wears a 4-into-2 exhaust header that was a common replacement in the day.

While the Honda 750 came standard with a massive front disc brake -- comforting, considering its speed potential -- this Beast chopper has no front brake at all and only a rear drum brake to slow it down. Cast-spoke Invader wheels were a '70s chopper mainstay.