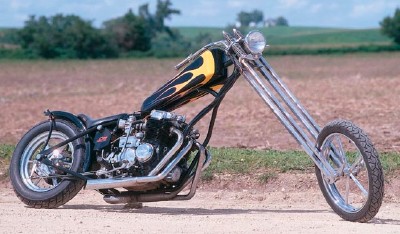 The Beast is a custom motorcycle with a 45-cubic-inch Honda engine. See more motorcycle pictures.

When Honda introduced its four-cylinder CB750 for 1969, the motorcycle world took notice. That included the faction known to take perfectly good bikes and turn them into something their own designers wouldn’t recognize, such as the custom chopper called the Beast. And so it was that shortly after hitting American soil, Japan’s new superbike became the basis for a new breed of chopper.

The owner of the Beast chopper remembers those days well, though he was just a lad at the time. After he grew up, he wanted to build a machine that reminded him of those wondrous choppers he remembered from his youth.

A custom-built hardtail frame was mated with a long set of springer forks to create a radically stretched chassis. Classic Invader wheels were added at each end, only the rear hosting a brake -- and a rather feeble drum brake at that. The 736-cc (45-cubic-inch) four-cylinder engine was treated to a set of Mikuni carburetors and Fubar 4-into-2 exhaust system. A fuel tank specially fabricated for this machine hosts flames on top of the black paint that was applied to all the metalwork.

While it’s a modern creation, this Honda-powered Beast chopper accurately follows the trail blazed by its ancestors, which also blazed a vivid memory in a young enthusiast’s mind.

Go to the next page for more photos and details of this Honda-powered chopper, the Beast.For more information on custom choppers and motorcycles, see: