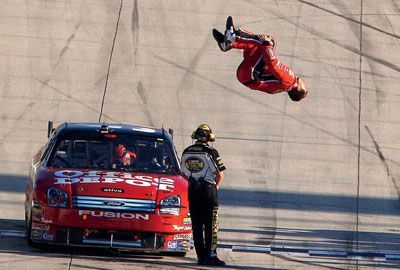 Image Courtesy Publications International, Ltd.
Carl Edwards does his signature backflip after winning the UAW-Dodge 400 at Las Vegas Motor Speedway. This was Edwards’ second win in a row after a victory the previous Monday in the rain-delayed Auto Club 500 at Fontana.
­

­Wi­th two races to go before t­he beginning of the Chase, Johnson and the team stepped up and won both regular-season races and entered the Chase third behind Busch and Edwards. Johnson ran steadily in the Chase with three wins, and never finished worse than 15th. At the NASCAR Awards Banquet in New York, 69-year-old Cale Yarborough awarded the 2008 championship ring to Johnson, who, at 33 years of age, could be a serious contender to Richard Petty and Dale Earnhardt's record of seven titles.

Carl Edwards celebrates his season-leading ninth NASCAR Sprint Cup win in the 2008 Ford 400 finale at Homestead-Miami Speedway. Edwards finished the year second in NASCAR Sprint Cup points, 69 behind Jimmie Johnson. Edwards had a stellar year in 2008. In addition to his nine victories, he accrued 19 top-fives and 27 top-tens, leading the series in all three statistics.