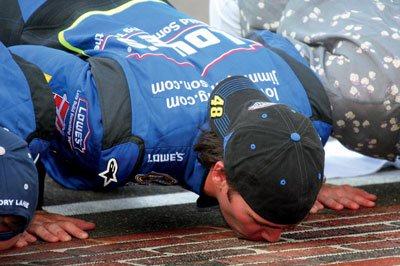 ­Jimmie Johnson etched his name in the NASCAR record books in 2008. The 2006/2007 NASCAR Sprint Cup Series champion added his third consecutive title, a feat matched only by the legendary Cale Yarborough, who won three in a row in 1976-78. Johnson also garnered another win at Indianapolis with his second Allstate 400 at the Brickyard victory in July. All this came after a disappointing start, as the #48 Lowe's team didn't score a win until the eighth race at Phoenix, and remained in the shadows wh­ile Kyle Busch and Carl Edwards dominated for most of the season.

January 11
Larry McClure announces that due to lack of sponsorship, Morgan-McClure Motorsports is shutting down. The team formed in 1983 and had three Daytona 500 victories and 14 total NASCAR Sprint Cup Series wins.

January 21
NASCAR says it will begin donating fine money collected from teams and drivers to the NASCAR Foundation, which supports charities, instead of adding it to the season-ending point fund.

March 9
Kyle Busch wins the first NASCAR Sprint Cup Series race for Toyota. It's the 40th start in a points race for the manufacturer.

­­May 3
Kyle Bus­ch spins Dale Earnhardt Jr. out of the lead with two laps to go and enrages a sell-out crowd at Richmond in the Crown Royal 400.

May 17
Kasey Kahne wins the NASCAR Sprint All-Star Race at Lowe's Motor Speedway. He is the first driver in the history of the event to win after being voted in by the fans.

May 21
Humpy Wheeler, president and promoter of Lowe's Motor Speedway, announces he is retiring from the speedway after 33 years. It was Wheeler's idea to light a superspeedway for night races.

July 10
Tony Stewart announces he is leaving Joe Gibbs Racing and will be driver and co-owner of Stewart-Haas Racing.

July 14
Ryan Newman says he will leave Penske Racing at the end of the 2008 season. Newman has won 43 poles and 13 NASCAR Sprint Cup Series races for Penske.

September 23
NASCAR announces a new random drug-testing policy. Also, all drivers, officials, and over-the-wall crew members will be tested in the preseason.

October 5
Carl Edwards sparks a 12-car crash during the Amp Energy 500 at Talladega that involves half of the Chase field.

November 9
TV network ABC cuts away from the last 22 laps of the Checker Auto Parts 500 at Phoenix and moves it to a cable channel, forcing many to miss the end of the race.

On the next page, see the full results of the 2008 NASCAR Sprint Cup Points Race.