­With two races to go before the beginning of the Chase, Johnson and the team stepped up and won both regular-season races and entered the Chase third behind Bu­sch and Edwards. Johnson ran steadily in the Chase with three wins, and never finished worse than 15th. At the NASCAR Awards Banquet in New York, 69-year-old Cale Yarborough awarded the 2008 championship ring to Johnson, who, at 33 years of age, could be a serious contender to Richard Petty and Dale Earnhardt's record of seven titles. 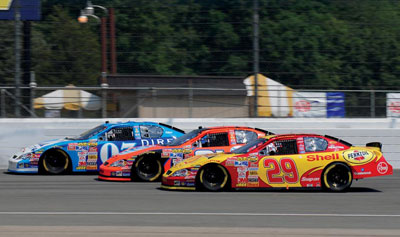 Publications International, Ltd.
More than half the field ran three wide during the Aaron’s 499 at Talladega Superspeedway. There were 52 lead changes over 188 laps, with Kyle Busch in the #18 Toyota winning his second NASCAR Sprint Cup Series race of the year.
See more NASCAR pictures.
­