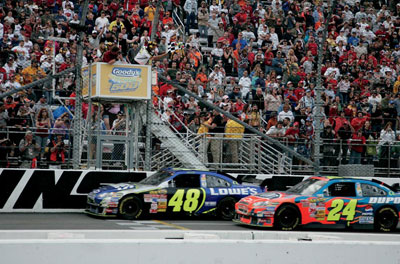 ­
Image Courtesy Publications International, Ltd.
Hendrick Motorsports teammates Jimmie Johnson in the #48 Chevrolet and Jeff Gordon in the #24 Chevrolet cross the finish line after waging a fender-banging battle for the win at Martinsville during the Goody’s Cool Orange 500.

­Jimmie Jo­hnson started off the seas­on with a disappointing 39th-place finish in the Daytona 500 and never led the points standings until after the first Chase for the NASCAR Sprint Cup event at Loudon. He remained between first and third in the standings until taking the points lead from his teammate Jeff Gordon after a win at Texas with two races to go. In the end, Johnson won the title by just 77 points. His victory came despite some midyear misfortune. In May, at Infineon Raceway, crew chief Chad Knaus was suspended for six weeks and the team fined $100,000 and 100 points for having altered fenders on the #48 Chevrolet. Car chief Ron Malec took over crew chief duties until Knaus returned from the suspension.