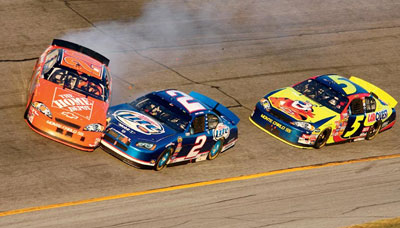 The 2007 NASCAR Sprint Cup title was the second in a row for Jimmie Johnson, who had 10 wins in the season along with 20 top-five finishes. This was also Rick Hendrick's seventh NASCAR Sprint Cup Series owner's title, which put him in second place behind Petty Enterprises in the team owner championship standings.

January 22
­NASCAR anno­unces changes to the NASCAR Sprint Cup Series points system. Race winners get an additional five points for winning a race. The Chase for the NASCAR Sprint Cup field increases from the top ten drivers in points after the 26th race to the top 12. All Chase drivers start with 5000 points plus 10 bonus points for each race win from the regular season.

February 14
Roush Racing announces that 50 percent of the team has been sold to Fenway Sports Group to create Roush Fenway Racing.

February 18
Kevin Harvick beats Mark Martin to the finish line as cars crash behind them at the end of the Daytona 500. Harvick won by .020 second, the closest finish in the 500 since electronic scoring began in 1993. Clint Bowyer finishes 18th while on his roof.

March 25
After seven years of development, NASCAR's new car design races for the first time at the Food City 500 in Bristol TN. When Kyle Busch's Chevrolet Impala takes the checkered flag, it marks the first time a winged NASCAR Sprint Cup car would head to Victory Lane since Richard Petty won at Dover on September 20, 1970, in a Plymouth Superbird.

July 7
Officials with Sprint-Nextel and NASCAR announce that the NASCAR Nextel Cup Series will be renamed the NASCAR Sprint Cup Series in 2008. Nextel was acquired by Sprint in late 2004.

August 12
Tony Stewart and Jeff Gordon trade spins in the Centurion Boats at the Glen race at Watkins Glen, NY, with Stewart coming out on top. On lap 45, Stewart spins in turn one, and Gordon passes him to take the lead. With two laps to go, Gordon spins in the same location, allowing Stewart to pass and win the event.

September 16
All 43 cars finish the Sylvania 300 at Loudon, NH, the first time all starters completed a race since the series adopted the 43-car field in 1998.

September 19
At a press conference in Dallas, TX, Dale Earnhardt, Jr., announces his Hendrick Motorsports Chevrolet will wear number 88, which became available after Robert Yates agreed to release the number.

­November 18
Matt Kenseth won the race, Jimmie Johnson won the championship, and Juan Pablo Montoya won the Raybestsos Rookie of the Year after the Ford 400 at Homestead-Miami Speedway. Johnson became the first back-to-back NASCAR Sprint Cup Champion since Jeff Gordon in 1997-98. The Ford 400 was the last race for the old car that had been in use since 1981. ­

On the next page, see the full results of the 2007 NASCAR Sprint Cup Points Race.