by the Auto Editors of Consumer Guide
NEXT PAGE
The 1949 NASCAR Strictly Stock season came about when Bill France toyed with the idea of a circuit for late-model American cars. Prior to the war, nearly every stock car race was entirely comprised of late-model sedans. But after the war, a shortage of new, postwar automobiles had delayed any serious thought of racing late models. That was, until May 1949, when France announced plans to conduct a "Strictly Stock" championship. Held on June 19, 1949, the race was open to the fastest 33 cars in qualifications, à la the Indianapolis 500. Seven other Strictly Stock races were staged during the 1949 season and tremendous attendance figures attested to their booming success. As the decade of the 1940s drew to a close, NASCAR's ­festival of noise and color had achieved a new level of respectability within professional motorsports. You can learn about these events and more in the following article, from season highlights to the year's final standings, all packed with plenty of photos.

NASCAR heavily promotes its new Roadster division featuring chop-bodied convertibles. The first race scheduled at Daytona is cancelled due to work on the newly designed Beach-Road course. Other events are slated for the Broward Speedway north of Miami.

Marshall Teague wheels his 1939 Ford Modified to victory in the 202.1-mile NASCAR season ­opener. The lead changes hands nine times among six drivers. Of the 75 cars that start, only 38 finish the grind.

A second experimental Strictly Stock Late Model race is added to the three-event racing card at Broward Speedway. Benny George­son drives a 1947 Buick to victory in the 10-mile contest. Roadsters and Sports Cars are the headlining attraction, but much interest is focused on the new Strictly Stock event. Bob Flock wins the Roadster race at an average speed of 104.5 mph.

Fonty Flock wins his fourth Modified championship race in a row in the 40-lap feature at North Wilkes­boro Speedway. Red Byron, the 1948 NASCAR champion, is unable to ­compete due to illness.


Given the interest piqued by two late-model events earlier in the season, NASCAR's Bill France scales back on his promotions of Roadster events and schedules a 200-lap, 150-mile Strictly Stock race at Charlotte Speedway in mid June.

Red Byron speeds to victory in a 40-lap Modified race at Charlotte Speedway. More than 10,000 spectators are in attendance, one of the biggest crowds of the season.

More than 13,000 spectators attend the inaugural Strictly Stock National Championship race at the 3/4-mile Charlotte Speedway. Glenn Dunnaway crosses the finish line first in a 1946 Ford, but is disqualified when NASCAR inspectors find illegal springs on the former moonshine car. Jim Roper is declared the official ­winner in a Lincoln. NASCAR Publicity Director Houston Lawing reports more than 5000 fans were turned away due to lack of grandstand space.

Hubert Westmoreland, owner of the car Dunnaway drove at Charlotte, files a $10,000 lawsuit against NASCAR for disqualifying his car in the 150-mile Strictly Stock race.

With the astounding success of the Charlotte Strictly Stock race, Bill France quickly announces the second race for late-model cars will be held at Daytona in July.


A 200-mile Strictly Stock race replaces the scheduled Modified feature at Occoneechee Speedway in Hillsboro, N.C. Bob Flock wins in an Oldsmobile after a six-car crash takes out Red Byron and Sara Christian. Over 17,000 spectators turn out to watch the event.

Curtis Turner wheels his Oldsmobile to a big victory in the 200-mile NASCAR Strictly Stock race at Langhorne Speedway. More than 20,000 spectators turn out for the ­celebrated event. Sara Christian finishes sixth in the field of 45, and race winner Turner invites her to join him in victory lane ceremonies.

With the financial success of the Lakewood Speedway Strictly Stock race, promoter Nunis schedules an encore event for Nov. 13. The race is curtailed by rain and completed the following week. June Cleveland wins in a Buick before 22,000 spectators.

NASCAR announces that the victory dinner to honor divisional champions will take place in Daytona Beach on Feb. 1, 1950. Red Byron is honored as the inaugural NASCAR Strictly Stock champion, while Fonty Flock is crowned the champion of the Modified division.

Continue on to the next page to learn the full results of the 1949 NASCAR Strictly Stock season. 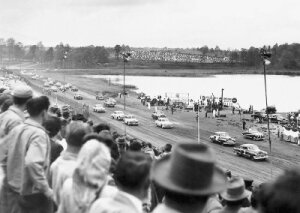 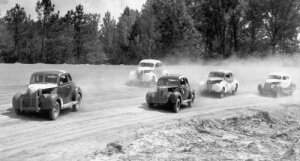 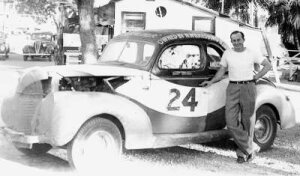