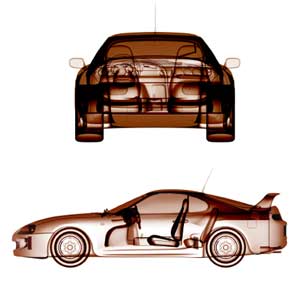 ­When Dale Earnhardt Jr. finished a disappointing 23rd in the 2008 3M Performance 400, many fans assumed he'd just been out-driven by Kyle Busch. Earnhardt Jr. had collided with a wall. He was tired. The car had been having problems.

For fans that had scanners, though, it was an entirely different race. At least one commentator, David Kingsley, used a scanner to listen in on the often-frustrated communications between Earnhardt Jr. and his longtime pit chief (and cousin) Tony Eury Jr. Kingsley's verdict? The 23rd-place finish was the fault of poor communications [source: Kingsley].

­Scanners reveal the human element still very much at work in stock car racing. A good scanner lets you be a fly on the wall in your favorite driver's car. You tune to his or her radio frequency, and presto -- you can overhear all the conversations with the pit chief. You're the first to know about mechanical problems. You're privy to all the split-second decisions that go into the race strategy. And if there's a crash, you get a firsthand account while the rest of the fans are still straining to see through the smoke.

A good scanner doesn't stop there, however. Many also let you listen to track workers' communications and receive late-breaking weather updates. Some even hook up to your computer for extra information and features from the Internet. It's no wonder scanners are must-have accessories for die-hard stock car fans.

If you want to have your own scanner, expect it to cost anywhere from $50 to $500. If you're not ready to make that sort of investment, you can rent one the next time you go to the racetrack.

Depending on the model -- handheld, mobile or base -- a scanner looks like either a walkie-talkie or a dashboard radio. A scanner also works a lot like a walkie-talkie or a dashboard radio. Scanners pick up radio frequencies, after all, and the best ones don't gather dust on non-race days -- they're designed for multiple uses, such as listening to public safety and news broadcasts and tuning in to police and military frequencies, ham radio and even CB communications.

­Every team in a given race has a different frequency. Frequencies change based on the race, the series and the track. In addition, the track workers have their own frequencies.

A scanner assigns each frequency a different channel. At a race, there might be 200 frequencies of interest, so you should make sure your scanner has enough channels to cover them all.

Fancier scanners -- and of course, rented scanners -- will come to you already configured with known racing frequencies, so you don't have to program them. For some series, such as the Sprint Cup, subscription services such as TrackPass provide the programming.

Beyond that, using your scanner is pretty much a matter of channel surfing. How you surf depends on your scanner and your preferences. You can set your scanner to jump automatically between drivers' frequencies, so you get a balanced view of the race. You can also program the scanner to ignore certain drivers or frequencies.

If you do choose to jump between channels automatically, make sure you know how to override that feature in case something exciting happens. If there's a crash, you don't want to be stuck listening to an unrelated frequency.

Now, if your scanner doesn't arrive preconfigured with frequencies, you have some research to do.

Accessories for Your Scanner

Depending on how you're most comfortable, you may want to carry your scanner around using a belt clip or wristband. You may also prefer to listen to the scanner using noise-reducing headphones -- it's loud at the track. If you like to carry things at belt level, but hate being jabbed by antennas, you're in luck -- some scanners let you switch to "stubby" antennas for greater portability. Some scanners also come with USB cables for computer connections. Finally, one fan recommends bringing an extra set of batteries, just in case [source: NASCAR Tailgating].

The simplest way to find stock car frequencies is also the most annoying. Step one: Place your fingers on the frequency dial. Step two: Turn it slowly. Step three: Stop when you hear something.

You may already have guessed the problem with this approach. As noted before, a scanner is just a device for picking up radio frequencies. So, if it hasn't been programmed, it'll pick up every radio event near the track, whether or not those events are related. You might get to overhear the conversations of truckers and police on the nearest highway. Sure, it could be fun, even instructive -- but it's not the race.

­Obviously, it makes sense to come prepared. Sleuth around online before the big day. Look for a list of frequencies you can print out and bring with you. Some subscription services (such as National Radio Data) charge for the information. Often the data leaks onto fan sites and racing forums. The tradeoff, of course, is that you must decide to trust the accuracy of your fellow fans' information, and you'll have to come to terms with your feelings about low-level digital piracy.

Free or not, you'll probably be able to find most teams' frequencies with a quick search or two. Remember that frequencies change by racing series, so don't assume that what worked last time is going to work the same way this time.

The printable frequency list has a second purpose -- it's your channel guide. Unless you can quickly memorize the channels for 200 different frequencies, you'll want to keep the list handy during the race. That way -- if, say, there's a wreck -- you'll know which channel to jump to for the scoop.

Once you're armed with your programmed channels and your frequency list, you're ready for a completely new experience of racing. Be prepared to spend a lot of time poking your friends to tell them about the latest bit of behind-the-scenes drama. You've always known there were a lot of secrets at the racetrack -- and now you'll be in on them.

To learn more about stock car racing and related topics, visit the links on the next page.

Can I Get That Scanner with a V-Chip?

Several racing fans note that if you have kids, you might want to think twice before letting the whole family use a scanner to listen to a race. In the heat of battle, tempers can flare, and drivers and pit crews rarely censor their vocabulary.