Welcome to the HowStuffWorks 500 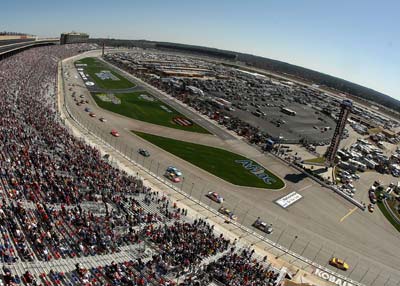 Is Atlanta Motor Speedway in Hampton, Ga. the future home of the HowStuffWorks 500? Probably not.
Chris McGrath/Getty Images

If we were going to hold a HowStuffWorks 500, we're definitely going to do it at the company's home track, Atlanta Motor Speedway. This is a popular venue that has been on the NASCAR circuit since its gates opened in 1960. It sits on the upper end of the track sponsorship price, and will cost at least $1.5 million for a single race. For that price, we don't get to+ use the NASCAR logo on our Web site, but we do get to use the name of the race in any promotions we choose.

Two NASCAR races run in Atlanta in October, the Craftsman Truck Series Georgia 200 and the Sprint Cup Series Pep Boys Auto 500. Let's say we displace those sponsors and make these two events our own. We may even get a discount for sponsoring both.

The races we're sponsoring are late in the season and part of the Chase for the Cup -- that's when the top 12 drivers vie for the championship during the last 10 races of the season. It will bump the price of track sponsorship up closer to $2 million, but casual fans as well as die-hards tune in for the Chase action, which means more potential customers adding to our return on investment.

Over the years, the speedway has undergone several expansions. It now seats 124,000, plus 138 luxury suites. The spring Sprint Cup races held in Atlanta in 2008 earned a 5.6 Nielsen Rating, which translates to more than 4 million households potentially hearing "We'll be right back with more of the HowStuffWorks 500" before every commercial.

As part of the deal, we negotiated for a skybox with food and beverages, plus the HowStuffWorks logo on the tickets and programs. Since we aren't team sponsors, we can root for anyone we want -- we don't even have to agree on which driver we like.

NASCAR has a roster of official sponsors. Some are expected, like Sonoco, the Official Fuel of NASCAR. Others are little quirkier: