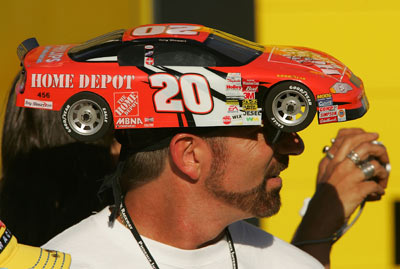 NASCAR sponsors find clever ways to get their company name or logo in front of the fans -- at home and at the track.
Stephen Dunn/Getty Images

After approving a tremendous amount of money for a NASCAR Sprint Cup team, wouldn't it be nice if the sponsor got something back -- besides goodwill?

The most obvious result is in the fanbase of over 50 million viewers. That's a lot of potential advertising impressions to make. When calculating the return on their investment, some companies will count the number of seconds their logo is clearly visible on the screen, and then multiply that time by the going ad rate to get an idea of how far their NASCAR dollars are getting them. With a high-profile partnership like Tony Stewart and The Home Depot, for instance, that works out pretty well, especially among NASCAR fans, which have a habit of being loyal to the brands that sponsor their favorite drivers.

But companies also take into account print, billboard, Internet, and other ways their NASCAR team gets in front of consumers. They track consumers' awareness and image of a brand, thanks to their sponsorship of a race team. They'll also do promotions linked to sponsorship to determine if it's getting the brand exposure they want. If more people try a product during a promotion, that's a good return on investment.

Employee morale is another benefit, one that often flies under the radar. Think how happy you would be -- you, the NASCAR fan -- if your company sponsored a winning car. Maybe, if you sold the most widgets or were voted employee of the year, you could get a couple of tickets to a race. Sponsorship is the kind of intangible perk that can attract and retain employees.

For the Fans Watching at Home

As gas prices climbed this spring, so did NASCAR's television ratings. Analysts speculate that there are two fuel-related reasons for the La-Z-Boy's triumph over the bleachers at the track. First, the cost of driving to the track, when added on top of tickets and trinkets at the event, became prohibitive for many race fans. Second, it seems that nobody is driving anywhere else, either, meaning the guy who was only an occasional Sprint Cup viewer is now home nearly every Sunday to see the action live.