Pre-race Inspection and Officials During the Race 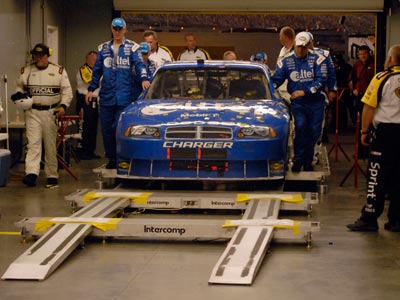 ­After each team qualifies, NASCAR conducts a post-qualifying inspection to look at areas such as the fuel tanks and the suspension. NASCAR teams have engineers that are smart enough to develop shocks that can actually adjust during a qualifying run. At times, cars have been found to be either too low in the front, or too high in the rear. A car that is too low in the front allows for more downforce on the nose of the car. In the turns, this characteristic provides better grip. Cars found to be too high in the rear provide drivers with more rear tire grip. This is a result of the rear wing sticking up higher into the oncoming air. Fuel tanks are always inspected to make sure teams comply with the designated fuel cell capacity. Even an additional gallon of gasoline can be the difference between winning a race and finishing one lap down as a result of running out of fuel. Fuel strategy plays a major role on race day. If you'd like to learn more about NASCAR fuel strategy and a technique called hypermiling, then read this article.

On race morning, teams are once again required to roll through the inspection process. As you read earlier, every team shuffles their car (or cars) through the final pre-race inspection station for one last check of everything. The process isn't quite as­ detailed as the initial inspection; however, officials are still paying careful attention to every detail, especially the rear wing. Inspectors slide gauges between the template and the hood to check tolerances. If the gauge doesn't slide freely, the hood is too high and must be fixed. That's why teams bring rubber mallets to the inspection area.

After the cars pass through the inspection line, they go back to the front of the garage and into the shock station. There, teams charge their shocks with the required amount of pressure. Under the watchful eye of NASCAR inspectors, teams install their shocks and are ready to go.

Now, you may think an inspector's job is done once the cars make it through the inspection lines. It's time to go watch the race, right? That sounds like a pretty good job perk. While they do get to watch the race, it's from the team's pit boxes. That's because an inspector doesn't actually get to rest during the four to six hours of a typical race. On the contrary, inspectors are NASCAR officials first and foremost. That means they have to serve as referees during the race. Each inspector is assigned a driver and it's their responsibility to make sure the teams are adhering to NASCAR rules throughout the entire race. Part of that responsibility is watching closely as crews change tires and fuel the cars during pit stops. For instance, it's the NASCAR officials' job to make sure all the lug nuts are on the wheel studs after each pit stop as well monitoring the actions of the crew members. Officials make judgment calls every single race that can penalize a driver with a time penalty, or worse. It all depends on the severity of the infraction.

­After the race is completed, NASCAR officials still have work to do. It's up to them to conduct the post-race inspection. Typically the top five cars are brought through this final inspection and checked for measurements one more time. It's here where some big-time infractions are often found. Let's go to the next section and learn about this final piece to the inspection puzzle. We'll also shed some light on how penalties can affect a team's position in the point standings.