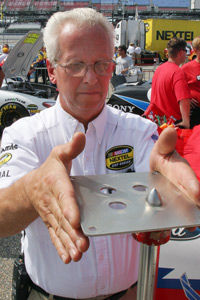 ­Drafting's importance as one of the techniques and strategies to win a race has as much to with the driver as the car. NASCAR imposes strict rules on engine power, engine components, body design and composition so no one team can gain too much of an advantage. The end result is a game of very small numbers and percentages and those numbers play out in body design and driving skill -- which, of course, includes drafting.

Daytona and Talladega are two superspeedway racing venues where a draft-savvy driver can really shine. Both tracks offer banked curves and long straightaways where a driver can push a car to its upper limits. It's for this reason that tracks require restrictor plates and other safety measures to limit top speeds. Because of this, capable drafting is often a key to success.

Traditional restrictor plates drop the overall power of the cars by about 300 horsepower [source: Boone]. Plates were first used in the 1970s to even the playing field between larger and smaller engines, as well as a safety measure as the tracks became larger and the cars became more powerful. In 2004, NASCAR driver Rusty Wallace tested a car at Talladega without a restrictor plate and reached a reported top speed of 228 miles per hour (367 kilometers per hour) on the backstretch and had a one-lap average speed of 221 mph. Wallace described the experience as "insane" [source: NASCAR.com].

Each track on the NASCAR circuit, including the superspeedways, has its own character. At smaller tracks, like Bristol Motor Speedway in Tennessee where drivers turn 16-second laps, the constant curve of the track means less opportunity to draft. Here, engines are allowed to run full power and downforce becomes critical. With more than 800 horsepower being produced in some races, downforce is maximized to stick the car to the track. At superspeedways, downforce is purposely reduced since the track layout requires higher speeds on the straightaways. The adjustments become a bit of a balancing game: Less downforce means greater straightaway speed, but less grip in the turns, and more downforce means improved grip in the turns, but slower straightaway speeds. As you can imagine, finding the perfect adjustment can prove difficult.

Until recently, the mix of track layout, engines, tires, drivers and strategies, drag and downforce required most teams to field several cars, especially for Sprint Cup series competition. This, in turn, led to the introduction of NASCAR's Car of Tomorrow -- a race car designed to be competitive on all NASCAR tracks.

NASCAR's Car of Tomorrow was introduced in 2007 and raced in just 16 events that first year. The initial plan called for the design to be featured in 26 of the 36 races on the 2008 NASCAR schedule and then bumped up to permanent use in the 2009 racing season. Instead, the new design was raced in all 36 races on the 2008 schedule and is currently the only car design NASCAR allows to race.

Dr. Jerre Hill, a professor at the University of North Carolina at Charlotte, explained how NASCAR's Car of Tomorrow standardizes the body of the vehicle, and adds a wing to the rear and an air splitter to the front.

The rear wing replaces the traditional spoiler and the front splitter is a thin horizontal piece under the front bumper that increases downforce. Teams will be allowed to adjust the angle of attack on the wing and the position of the front splitter to custom tune the car's performance on different tracks. Hill said the changes have a serious effect on the car's wake characteristics and therefore on the drafting potential of the car. The end result is a car that's harder to pass and harder to draft.

Up next, we'll learn how strategy plays a role in the NASCAR draft.