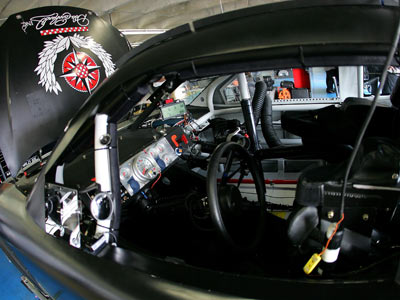 The Car of Tomorrow cockpit boasts a number of safety improvements over the old model.
Streeter Lecka/Getty Images

With the inception of the Car of Tomorrow, the cars used by each of the different teams are much more standardized across the board, making NASCAR more like spec racing than ever before. Spec racing is a form of competition where drivers compete in nearly identical vehicles. When every car on the track is prepared in the same way, the race becomes more about driver skill than engineering and who has the most money to build the best race car.

The Car of Tomorrow can also be seen as a cost-saving measure for the competing teams. In previous years, NASCAR teams had to build several different cars for the various tracks on the NASCAR circuit. They built different cars for short tracks, road courses and super-speedways. The Car of Tomorrow uses the same frame, roll cage and body for all different types of race tracks. Of course, most teams do have more than one car; mainly because there's always a chance that the driver may destroy one during practice or qualifying.

But critics argue that building the new car was a multimillion-dollar investment for racing teams -- as they had to discard all of their old cars in favor of the new design -- and they won't actually benefit from the reduction in costs for years to come.

At the same time, many fans contend that making the cars more or less the same takes away from NASCAR's "run what you brung" days where a variety of vehicles raced against each other. Many fans have said that they don't want to see a spec racing series, but instead want a race where there's a reason a Dodge can beat a Ford, or vice versa.

In the next section, we'll examine the primary reason the Car of Tomorrow was developed by NASCAR: safety.