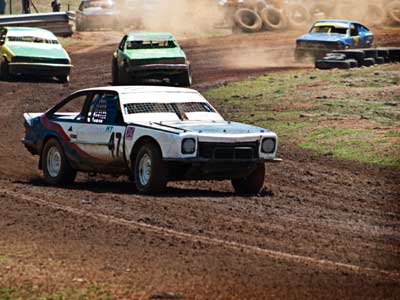 ­High-speed, souped-up cars, competition, danger, roaring engines and flying mud -- put them all together and you have one popular sport: dirt stock car racing.

On any given weekend throughout most of the year, almost 800 dirt tracks come to life across America. Tickets are bought, prize money is won, autographs are signed and damaged cars are hauled away by wreckers.

Unlike its asphalt counterpart, which has a main governing body -- the National Association of Stock Car Racing (NASCAR) -- dirt stock car racing is more decentralized. It is guided by a diverse array of sanctioning organizations. Some are national; most are regional. Each organization can select the particular types of vehicle configurations it wants to sanction.

­Together, the sanctioning organizations and track owners have devised rules and regulations that govern dirt stock car racing. Competitors can choose to participate in as many races as they'd like, as long as the vehicle they're racing complies with an event's guidelines. Each track has a technical inspector, or tech, to ensure participants meet the required vehicle standards [source: Jewett].

Because there are so many tracks and such a variety of sanctioning bodies, rules for one particular type of race can be completely different from a similar race at another venue. The more popular divisions, such as "dirt late models" and "modifieds" tend to have guidelines that are more consistent across the country. Others, like some of the entry-level classes, have few specific guidelines beyond certain safety requirements [source: Holder].

Most race events are broken down into different categories, which are defined by the type of vehicle being used. For example, one event may have 70 different race teams competing in five different divisions. Preliminary heats transpire, with drivers vying for spots in the final races. Prize money goes to the top finishers, who also earn points from an event's sanctioning organization, which also awards payouts to top racers at year's end.

Read on to learn what's under the hood of dirt racing stock cars.

­Dirt Late Model -- As the top-of-the line machine on dirt, these are low-slung, very wide, super-fast racing juggernauts. Weighing in at 2,300 pounds (1,043 kilograms), they use high compression V-8 engines that can generate up to 800 horsepower. Bodies are made from aluminum, giving them all a Batmobile-type look. The car's rear end is completely open; spoilers provide down force. These very expensive machines (an engine alone can run $35,000) are very popular with fans.

Limited Late Models -- Also known as sportsman and super sportsman cars, late model stocks or outlaw cadets; some of these models look just like dirt late models. A limited late model typically uses a small-block V-8 with a 5.7-liter engine. Most tracks have a displacement limit for a limited late model engine. Frames can also be a standard automotive type.

Crate Engine Late Models -- This vehicle combines a dirt late model with a standard crate engine from one of the "big three" auto manufacturers (Chrysler, Ford and General Motors). Sealed so it can't be modified, this vehicle runs under $5,000.

Modified -- This vehicle typically combines a stock car, with a lighter-weight body, and good performance at a reasonable price. These are easy to spot, since part of the front body is exposed, giving the car an open-wheel look in front and offering a view of the racing machine's power plant. Most of these cars use a small-block (5.7-liter) Chevy carbureted engine.

Entry Level -- Also known as hobby stocks, street stocks, pure stocks, bombers, factory stocks or stingers; requirements for this category can vary greatly. Some tracks will specify that this class is for novice drivers only. Typically, roll cages must be welded into the frame. All glass, vinyl, upholstery and lights must be removed from the vehicle [source: Columbus Speedway].

Wonder where you can find dirt-racing tracks? Go to the next page and keep reading to learn more.

­Dirt-racing tracks are located all over the country. While the season typically starts in March and runs through October, sanctioned and unsanctioned races can run into late December and January.

­Just as dirt-racing cars come in a wide range of configurations, so do the tracks on which they race. Dirt tracks come in the following lengths: quarter-mile (.4 km), three-eighth mile (.6 km), one-third mile (.5 km), half-mile (.8 km) and even one-mile (1.6 km). Paved ovals are typically much longer.

Smaller tracks are usually banked. Cars racing on flat, one-mile ovals, such as the DuQuoin and the Illinois State Fairgrounds in Springfield, average more than 100 miles (161 kilometers) per hour [source: Holder].

During the racing season, weather permitting, tracks offer regular Friday night and Saturday races. Excessive rain will cause tracks to close if the track can't adequately dry out by race time. Most dirt tracks are made of clay; water is sprayed on the track to maintain a level of "tackiness." Packed down by cars, the tracks continually change and are not always smooth. Occasionally, car parts have been known to go airborne. There's nothing like a muffler in the grandstand to add some excitement [source: Zeller]!

Dirt tracks are much easier on tires. Most dirt teams will need only two or three sets of tires a season; compared to a car racing on asphalt, which can use up a set of four tires in a single race.

Sometimes, drivers find that there's more than clay on the track. For example, if horses race on the same track, they leave behind debris and other material. Since the cars lack windshields, drivers find their helmet visors useful in protecting them from flying mud, bugs and horse excrement.

Ready to start your own engine? Tracks are listed online by state, and schedules of some 2009 races around the country are also available on the Internet. As one racing prompter says, "Dirt is for real racing and asphalt is just for getting there" [source: Speedways Online].

To learn more, visit some of the links on the following page.

NASCAR runs its events on asphalt. Many tracks (such as those at Talladega, Charlotte and Las Vegas) have companion dirt tracks nearby. One of the major tracks on the NASCAR schedule, the Bristol Motor Speedway, actually coated itself in clay in 2000 to host the DIRT Late Models and World of Outlaws Sprint Cars events.