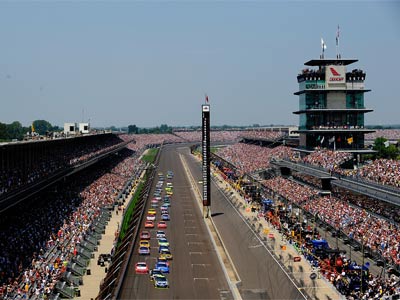 Indianapolis Motor Speedway is just one of three tracks on the NASCAR circuit not owned by SMI or ISC.
Rusty Jarrett/­Getty Images for NASCAR

­NASCAR officially dropped the green flag on its existence in 1949. That first year consisted of just eight races -- seven were run on dirt-surfaced tracks and one on a road course. Daytona was on the schedule, just not the same 2.5-mile (4.02-Kilometer) superspeedway that NASCAR fans know today. From 1949 to 1958, Daytona was a 4.15-mile (6.7-kilometer) road course including a 2-mile (3.22-kilometer) strip of the beach itself. Slowly, NASCAR evolved from dirt and sand racing surfaces and settled on paved tracks. At present, the NASCAR Sprint Cup Series visits 22 different tracks for 36 regular season races and two exhibition races. Of those 22 tracks, two are road courses (Infineon Raceway and Watkins Glen), six are superspeedways (Daytona, Fontana, Indianapolis, Michigan, Pocono and Talladega) and the rest are various oval shapes ranging from a half-mile to 2 miles (0.8 to 3.22 kilometers) in length.

NASCAR is unique when compared to some of the other major North American sports. Unlike the National Football League (NFL), Major League Baseball (MLB), the National Hockey League (NHL) and the National Basketball Association (NBA), NASCAR is a sanctioning body rather than a league of teams. Yes, those four major sports leagues consist of independently owned teams, but the number of teams in each league is finite and strictly defined by the league. NASCAR is a more of an organization that dictates rules and procedures and if you would like to try to play, you're welcome to give it a shot. This primary difference also contributes to making the NASCAR Sprint Cup schedule vastly different from any other sports schedule.

Sports teams in those four leagues are associated with a city and have a certain obligation to the community. For example, in order to be considered for an NFL team, the owner of the team must find a suitable community that will meet the requirements set forth by the league office. But once that city and the team's owner reach an agreement, the team receives a guaranteed percentage share of home games. NASCAR, on the other hand, has no home and away teams. Race tracks are owned and operated independently from NASCAR. Along the same line, the various tracks are not exclusive to any specific racing series and NASCAR can (and does) choose whatever track it wants to hold races on.

Speedway Motorsports Inc. (SMI) and International Speedway Corp. (ISC) are considered the two heavy-hitters in the racing facility and track ownership world. Between the two companies, NASCAR visits tracks owned by SMI or ISC for 31 out of 36 races. In all, ISC owns 12 tracks on the NASCAR circuit while SMI owns seven. Indianapolis Motor Speedway, Pocono Raceway and Dover International Speedway are the only tracks on the circuit not owned by either SMI or ISC. This bit of info may interest race fans: ISC is owned by the France family, the same family that founded and currently owns NASCAR. While it may sound like a conflict of interest to own tracks as well as the racing series, NASCAR officials are smart enough to also give fans races at popular tracks such as Bristol Motor Speedway and Atlanta Motor Speedway -- both tracks owned by SMI.

One way SMI or ISC can attempt to finagle another race at one of its tracks is by purchasing a track on the current NASCAR race schedule with the intent of moving the event to another track owned by the corporation. That's exactly what SMI owner O. Bruton Smith did in 2004 when he purchased Rockingham Speedway and proceeded to swiftly shut it down. NASCAR gave one of the former Rockingham race dates to Phoenix International Speedway (an ISC track) and one went to Texas Motor Speedway (an SMI track). That seems fair, right? Well, not to the NASCAR fans in the Rockingham, N.C. area.

­Unfortunately, not every race track can have a NASCAR race. The next section will explain what NASCAR officials take into consideration when they set the schedule. Also, how would you like it if the NFL scheduled the Super Bowl as its first game of its season? Sound a little crazy? Read the next page to find out how NASCAR pulls something like that off each and every year.