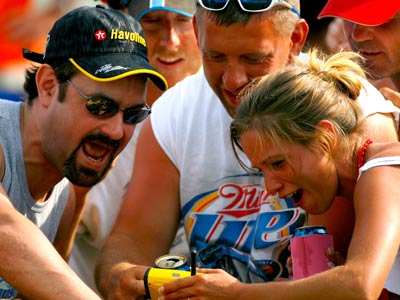 FanView allows race fans to see (and hear) all of the action at the track -- not just what's happening in front of them.
Rusty Jarrett/­Getty Images for NASCAR

­Allowing fans to listen to as-it-happens in-car audio is one of the great things about NASCAR. Numerous providers offer services and equipment that make it easy and convenient to listen in. Some available devices and services offer additional features such as real-time statistics, in-car camera video and other race-related content. Keep in mind participation may require purchase of a subscription, the actual communication device and/or additional services.

One way to listen in at the track is to use Sprint NASCAR FanView from Sprint Nextel. You can rent or purchase this Sprint-supported handset that combines scanner audio capability with full color race video.

Fans may also rent or bring their own radio frequency scanners to NASCAR events. The provider will program rented scanners to receive favorite team frequencies. You can also obtain lists of team frequency assignments from vendors at the track -- for a small charge, of course.

Sprint customers who have a data pack for their mobile phone can access NASCAR Sprint Cup Mobile to monitor live in-car audio from chosen drivers -- even as they watch live race coverage on their phone. A "My Driver" feature helps fans customize the application to focus on preferred drivers.

If you're a satellite radio subscriber, then you have another option: Sirius XM Radio's NASCAR Channel (channel number 128) carries programs covering many NASCAR topics. Multiple "Driver2Crew" channels are monitored during race broadcasts.

If you're not satisfied with simply hearing the on-track action and you want to see what's going on, satellite television might provide just what you're looking for. NASCAR HotPass on DIRECTV offers in-depth video and audio live from several cars during each NASCAR Sprint Cup Race. Live coverage can also be monitored on a Sprint FanView device at no extra cost, when certain conditions are met.

Fans that want to listen to NASCAR racing action over the Internet have the option of subscribing to NASCAR TrackPass Scanner. This service enables subscribers to listen to real-time NASCAR Sprint Cup Series audio through a computer. The user can select and listen to his or her favorite driver, scan all 43 driver channels for action or switch to the NASCAR Official channel to hear even more track-talk.

­If you found this article interesting, then you'll probably want to take a look at the next page, too. There, you'll find several articles focused on NASCAR and NASCAR-related topics. It's definitely worth a look.

Sprint Nextel and NASCAR teamed up to design the FanView handheld device. Much more than a radio scanner, this feature-packed little device is so impressive that TIME Magazine added it to their list of best inventions for 2006. FanView gives NASCAR's most dedicated enthusiasts unsurpassed access to real-time color racing video, in-car audio and race statistics at the track. Features include multiple presets for driver-to-crew audio channels and instant video and audio replays. Available video feeds provide multi-camera live NASCAR HotPass coverage from four race cars via DirecTV. FanView handsets can be rented or purchased at the track from authorized vendors, or can be ordered online. Kangaroo.TV, a Canadian company, licenses the dynamic technology that makes FanView possible.