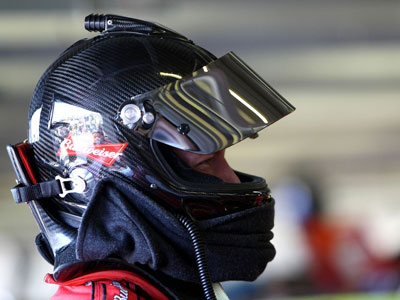 Sure, he's relatively safe; however, with so much safety equipment in the way, it’s a good thing he can communicate with a spotter who's watching the blind spots.
Jonathan Ferrey/­Getty Images

­Team members carrying a two-way radio tuned to the team frequency during a NASCAR race may include the owner, team manager, driver, crew chief, team spotter, crew members, competition director, engineers, mechanics and specialists. Even more people are involved in a multi-car team. The driver most often consults with his team's race spotter and crew chief during a race. Of course, the owner or team manager can intervene whenever he or she feels it's necessary.

The team spotter provides essential information to help the driver get the car around the racetrack and, with any luck, into Victory Lane. Even as NASCAR race cars have become safer in recent years, the driver's ability to see to the sides and rear of the car has been diminished by full-face helmets and head-and-neck-restraint devices. The spotter often serves as a second set of eyes for the driver during the race. He watches the "blind spots" to the sides and rear of the car and confirms via radio when the track is clear for a pass or maneuver. It is not surprising that many spotters are former drivers.

The team spotter also keeps the driver informed of the overall track conditions and developments, especially when crashes and cautions occur. He may even relay messages back-and-forth for drivers on multi-car teams.

A dedicated spotter was first required during major races in 1990. Since 2002, a spotter has been required whenever a car is running on the track, even during practice and qualifying runs. The team spotters have a birds-eye view of the track, watching from atop the press box or grandstand. NASCAR also has its own spotters watching the track at all times.

The crew chief remains in direct contact with the driver throughout the race. This extremely busy person is responsible for the shop team that builds and tunes the car as well as the performance of the pit crew. The crew chief moderates communication between the driver and pit crew and coordinates pit stops with the driver. Additionally, the crew chief may monitor lap times, track fuel usage and watch tire wear, all critical factors typically discussed with the driver during the race.

­The amount of radio "chatter" generated by a team varies with individual personalities. Some drivers limit talk to absolutely necessary comments and questions. Others share their observations and concerns in detail with their spotter.

You may be surprised to learn that it is possible for NASCAR drivers to talk to each other -- if their radios are programmed to the same channels, that is. Multi-car team drivers often talk during a race. When asked if teams listen to other team's "chatter" during races, NASCAR insiders say, "Everybody listens to everybody." Teams can get their radios programmed to monitor any team on the scan list for a given race.

­What sort of insider talk might you hear when you listen in? Tune in to the next section to find out.

It is not permissible (or legal under FCC rules) for fans to attempt to communicate via radio with teams or drivers. Special programming equipment and security codes help to ensure two-way communication occurs only between authorized persons on NASCAR's allotted frequencies.