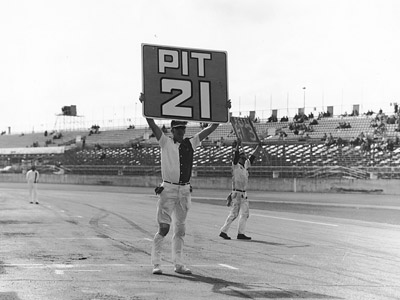 Prior to in-car radio communications between drivers and crews, chalkboards were used to inform drivers of their position on the track, margins between cars and when to come in for a pit stop.
RacingOne/­Getty Images

­During the early decades of NASCAR stock car racing, the driver and pit crew relied on visual signals to communicate. Each crew had a large "pit board," onto which they would chalk instructions and information -- such as the car's position in the race, the number of laps to go, estimated fuel remaining and so forth. The pit board would also inform the driver when to come in for tires and fuel. The crew chief or another team member would hold the board up for the driver to read, as the race car flashed by the pit area.

The driver could only communicate with hand signals as he raced around the track. For example, he might reach around the windshield pillar and tap the hood if he wanted to come in for a pit stop, or he would thump on the door panel if the suspension needed attention. The driver couldn't fully explain a concern with the car to the pit crew until the car had rolled to a stop in the pits.

­The advent of two-way radio communications allowed the driver to describe and discuss specific issues with the car before making a pit stop. Now, a vibration in a wheel or a miss in the engine could be reported, so that the pit crew could be ready to respond when the car came in to pit.

Driver Jack Smith is credited with being the first driver to win a NASCAR superspeedway event while maintaining two-way radio communication with his pit crew. Smith and crew chief Bud Moore kept each other informed, via a radio setup originally designed for delivery trucks, during the July 4, 1960 Firecracker 250 [source: Phillip].

As electronics became more reliable, NASCAR teams began to routinely use two-way radios for communication. By the mid-1970s, headsets and radios were a common sight in the pits. During the 1990s, radio technology was increasingly integrated into the car and the driver's helmet.

­­Today, a transition to the age of digital communications is underway within NASCAR. On the next page, we'll look at the audio communications hardware that a contemporary NASCAR driver and team typically use for communications.

NASCAR racing legend Junior Johnson first used a two-way radio in April 1961, during a drive to victory at the Martinsville Speedway in Virginia. According to Johnson's 1999 biography, "Brave in Life: Junior Johnson," he turned the radio off during the race -- because the crew chief was using it mostly to tell him to slow down [Source: Higgins].