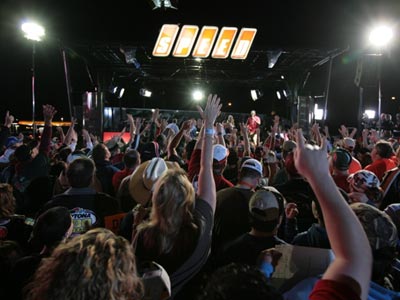 Trackside and on the air
Photo courtesy SPEED Network

­The year 2007 marked the first year in a series of long-term contracts that NASCAR inked with several major networks: FOX, SPEED, TNT and ABC/ESPN (Both ABC and ESPN are owned by the Walt Disney Company; ESPN provides sports coverage for both networks).

The first 13 Nextel Cup Races, beginning with the Daytona 500, are carried by the FOX network. TNT provides coverage for the next six races, and the 17 remaining Nextel Cup Series points races are broadcast by either ABC (which broadcasted its first NASCAR race in 1970) or ESPN. The Chase for the Nextel Cup, a series of 10 races, is broadcast by ABC.

Different networks may stream live video of races online, and all networks share certain rights to the races and access to race footage.

Why so many networks? Reasons include the sheer number of races and the ability to gain a larger audience from the carry-over from other networks' publicity efforts once networks pass the baton throughout the season. From NASCAR's point of view, having several different broadcasters amplifies the marketing and promotion, and also presents the event in a variety of voices and formats.

Fans are less thrilled, since the abundance of networks can make it tricky to find the race without flipping through all the channels. On the upside, if fans dislike the broadcast styles of any of the networks, they can grin and bear it until another network picks up coverage mid-season.

DIRECTV offers a multi-media package, and Sirius Satellite Radio paid $107 million for the five-years' rights to provide a dedicated channel that features all NASCAR all the time, including race coverage, interviews and feature stories.

For the first half of the year until the beginning of football season, NASCAR gets higher television ratings than any other sport, bringing in more viewers than even the NBA playoffs and more than doubling the viewership of regular season NBA games (NASCAR, on average, brought in a 5.7 rating for the FOX network in 2008, while NBA games on ABC had only a 2.2 average rating) [source: Mulhern].

No matter who is broadcasting on any given week, more and more fans are tuning in to watch their favorite cars and drivers compete for the championship. This means networks can negotiate high-dollar contracts with advertisers who want to put their brands before this captive audience. The commentators are genuinely excited about the races they're covering, but the network executives only get excited by ratings and revenue streams. Everyone, it seems, is happy.

For lots more articles on NASCAR, from safety to sponsorship, see the next page.