Live, From a Fancy Trailer, It's the NASCAR Prerace Show! 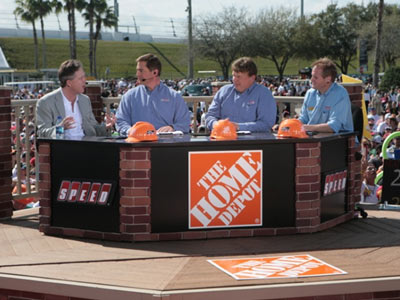 In the last section, we learned how networks prepare for a race broadcast. Now that everything is in place, cameras are rolling and microphones have been checked, it's time for the prerace show.

With weekend races one after another during the season, networks have to hustle to turn each event into a memorable broadcast. To do so, some networks have developed portable studios that can be packed up and shipped in containers around the country to each race.

­These mobile studios add a lot to the preshow broadcast. Without them, analysts would either have to discuss the race from the network's main studio hundreds of miles away from the event, try to film in the tight confines of the press box, or stand around in the infield grass, none of which are suitable to providing a top-of-the-line viewing experience.

Portable studios aren't visually much different (for viewers at home) from the state-of-the-art network sets that we're used to seeing during football or baseball broadcasts. One exception may be windows placed behind the commentators to provide a view of the racetrack, pit road or infield. One drawback is that it requires the mobile studio to be placed in a position that offers a great view, which isn't always possible. To overcome this obstacle, mobile studios often use a variety of large and small digital screens behind the commentators, so that ever-changing race footage, visuals and statistics can accompany the subject being discussed. On the other hand, SPEED network uses an open-air stage to broadcast live in the middle of a throng of fans.

A number of reporters, analysts and racing legends make regular appearances in these prerace studios. The commentators discuss the season's standings, point out to the viewer at home certain things to look for in that day's race and analyze the likely strategies of different drivers. To keep the pace of the broadcast moving along, the commentary is regularly broken up with related pretaped segments that may feature the mechanics and crewmen of a certain team, features on previous races and race winners, and light-hearted interviews with drivers or a look at drivers' everyday lives. Graphics may be used to examine the turns and straight-aways of a given track, or producers may cut to live footage of teams getting prepared for the long day ahead. When the broadcast "cuts back" to the studio, one of the top drivers may be briefly interviewed, or commentators may talk racing with a reporter working the pit road, both being featured on a split screen.

When the prerace show goes to commercial, it can difficult to notice the difference. Most commercials in these coveted time slots will feature NASCAR drivers and racecars adorned with the products being advertised. You may have to wait until the din of the car engines dies down toward the end of the commercial to find out if you're supposed to buy Craftsman Tools, eat Juicy Fruit products or shop at The Home Depot.

Numbers that tell a statistical story about the season overall, or that are used to compare different drivers, will be put on the screen while the analysts debate among themselves (and several million viewers at home) what the figures may mean for the race ahead.

­Finally, the national anthem will be sung, viewers will be treated to a 43-engine serenade, and the race (coverage) begins on the very next page.