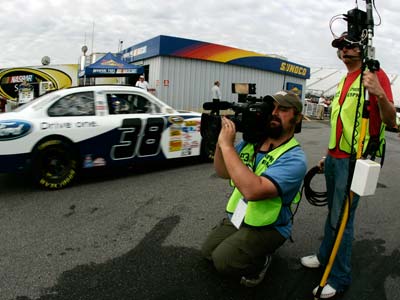 ­NASCAR races -- often 400 or 500 miles (644 or 805 kilometers) long -- last several hours, and that makes for a lot of awkward dead air if networks aren't ready to fill that time with insightful commentary, interesting statistics and great camera shots. It takes a village to make a broadcast, and about 300 production, technical and support personnel from the different networks help put the Daytona 500 on the air. (Fox estimates that its crewmembers at NASCAR Speedweeks consume 13,000 bottles of water, 125 gallons (473 liters) of coffee and 5,000 soft drinks!)

Preparations begin long before the commentators arrive at the race. For a Saturday race, a flotilla of tractor trailers may arrive as early as Monday stuffed full of the broadcasting gear. (The six tractor trailers used by the SPEED network haul a total of 380,000 pounds (172,365 kilograms) of sets, cameras, generators and other equipment.) Each track provides an area for networks to park, empty their trailers and begin assembling equipment. The days leading up to the race are spent unloading gear, establishing computer and communications networks, running audio and video cables, setting up cameras and preparing the mobile studio center (which we'll discuss shortly), which can often be shipped in a single trailer. By Friday, everything should be ready for the big event the following day.

There are many standard camera locations at each track, such as on the fence line and around the upper deck. There's also one centralized tower cam. At the Daytona 500, Fox Sports uses 20 manned cameras, two slow-motion cams, more than a dozen robotic race cams, 12 in-car camera packages that offer three different camera angles, and four roving wireless pit/garage camera crews. In addition to these locations, networks often look for new and interesting places to put stationary cameras. Networks try to enhance the viewing experience and provide new points of view by drilling holes in the track and positioning lipstick-sized cameras to film cars as they approach and then roar over the subterranean camera lens. Cameras can also be placed inside the walls of the track. Upwards of 80 cameras may be used to film a single race.

While all of this is happening, things are hopping back at the main network studio and mobile editing units on site. Producers, writers and editors are creating pretaped features and segments to add spice to the prerace portion of the program. These clips must be conceived, written, arranged, taped and edited throughout the entire season. NBC commentator (and former driver) Wally Dallenbach Jr. tapes a prerace segment called "Wally's World," in which Dallenbach takes a celebrity (like director Quentin Tarantino) for a few high-speed spins around the track. The odds of Tarantino happening to wander by the track the day before the race are slim, so regular segments like this must be planned and executed well in advance.

Researchers and statisticians must also dig for interesting storylines and crunch numbers such as each driver's average speed at a particular track the previous year, so that commentators will have a deep well to drink from when it comes time to entertain and inform the audience.

The on-air personalities arrive on a Wednesday or Thursday to prepare for a Saturday race, and the SPEED network has 14 different commentators and analysts at any given race.

The on-site weeklong preparation fulfills another important purpose: maintaining contact and establishing rapport with the race teams that are also preparing for the event. This comes in handy when a pit reporter and cameraman need to solicit some real-time thoughts from a stressed-out crew chief in the middle of a tight race.

­Now that the preparations are done, it's time for our next section -- the prerace show.