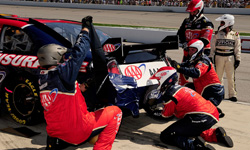 Big sheets of strong adhesive material are used for larger body repairs during a race.
Rusty Jarrett/­Getty Images for NASCAR

­As awesome as it is at pretty much everything (repairing prom dresses included), sometimes duct tape just isn't enough for the job. That's where BearBond comes in.

Like a real bear, BearBond isn't something you want to mess with. BearBond is really just large sheets of very strong adhesive. If you had the misfortune to get stuck to it, you'd have a hard time getting unstuck. That's why NASCAR crews prefer it for larger body repairs. They can use one large, strong sheet of BearBond as opposed to a lot of little pieces of duct tape. Duct tape is still the tool of choice when it comes to small fixes -- particularly under the hood -- but BearBond is where it's at for large body structure repairs.

­Of the tools that we've mentioned so far, you can purchase some of them just about anywhere -- duct tape included; however, BearBond can be a little more difficult to find. But keep reading to learn about a few essential NASCAR tools that you probably have in your garage or basement right now.