by Larry Woody
Prev NEXT
2 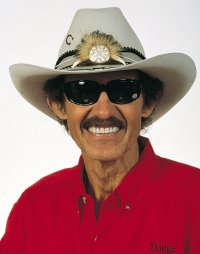 Richard Petty remembers the 1979 Daytona 500 with a chuckle. Of the brawl between the Allison brothers and Cale Yarborough, he says: "I'd have liked to have stopped and watched."
©2007 Wieck Media

Why it's No. 2: Petty won the 1979 Daytona 500, but nobody was watching. When he crossed the finish line, everyone's eyes were glued to the Daytona International Speedway infield, where Cale Yarborough was slugging it out with the Allison brothers, Donnie and Bobby.

Cale and Donnie had been waging a stubborn side-by-side battle heading into the final lap. Neither would budge an inch, and when they couldn't wedge two cars into a hole made for only one car, they collided and crashed. Their wrecked cars went spinning off the track and jolted to a stop in the muddy infield.

Bobby, driving in the back of the pack, pulled over to check on his brother. Then he made the mistake of "checking" on Yarborough. A stocky, hickory-tough former semipro football player, Yarborough had a quick temper. Suddenly, helmets were swinging and fists were flying.

This was the first NASCAR race ever to be televised live flag-to-flag, and the viewers got an eyeful. They were captivated as they watched those wild-and-crazy stock car drivers beat each other to pieces both on and off the racetrack.

NASCAR would grow into the second-highest-rated pro sport on TV, behind only the NFL -- and it all started with a fistfight on a muddy Daytona infield.

"I'd have liked to have stopped and watched," chuckled Petty, who sailed past the wreck on his way to victory. "It looked pretty excitin'."