by Larry Woody
Prev NEXT
4 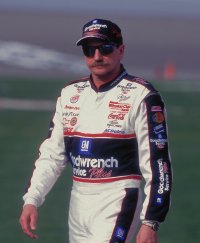 Emotion overtook the pits and the grandstands when Dale Earnhardt won the 1998 Daytona 500.
©2007 Wieck Media

Why it's No. 4: Earnhardt, the baddest dude in racing, was nicknamed "The Intimidator." Daytona International Speedway, however, wasn't scared -- Earnhardt had been unable to intimidate the fearsome track when things mattered most.

Heading into 1998, Earnhardt was 0-for-19 in the Daytona 500. He had been robbed of victories at the last second by blown tires, wrecks, dry gas tanks -- you name it.

It showed. With one lap to go in the race, Earnhardt was leading when a John Andretti crash brought out a caution flag. The field was frozen -- the race was over. Earnhardt, who had led the previous 61 laps, was about to win the Daytona 500.

As Earnhardt cruised down pit road on his way to Victory Circle, members of rival pit crews rushed out to slap his hand and offer him congratulations. Fans in the grandstands went wild. "Finally," Earnhardt said after climbing out of his car.

That said it all. At long last, the toughest driver of them all had overcome his tough luck in the Daytona 500.