by Larry Woody
Prev NEXT
6 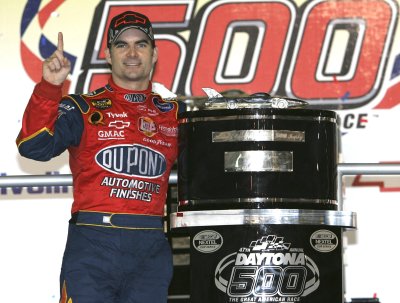 Why it's No. 6: Today, Gordon is the most famous driver in NASCAR. And his victory in the 1997 Daytona 500 -- at 25, he became the youngest person ever to win the race -- helped catapult him to that status.

The race ended under caution, but the action leading up to that point was electric -- Gordon and Bill Elliott waged a fierce battle for the lead. "It's an experience I'll never forget," Gordon said of the duel. "I got chill bumps."

Adding drama to the afternoon were the travails of Dale Earnhardt, Gordon's main NASCAR rival. Earnhardt crashed hard during the race, but when his car was hooked to a tow truck, he intervened and demanded that it be unhooked. Earnhardt then crawled inside, managed to get the mangled car started, and completed the race. That, at least, was a moral victory for the man known as "The Intimidator."