by Larry Woody
Prev NEXT
9 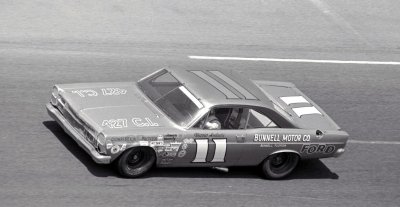 Why it's No. 9: Andretti's victory in the 1967 Daytona 500 brought serious attention to a sport that badly needed it. At the time, NASCAR was merely a provincial happening, its good ol' boy fan base located in the Southeast. The national spotlight shined on Indy cars -- sleek, open-wheel bullets that were the epitome of cool. And no Indy car driver was more cool or famous than the 27-year-old-Andretti, who had won the series championship in 1965 and 1966.

In the winter of 1967, Andretti decided to head to Daytona, the land of bulky, rumbling stock cars. Would Andretti measure up -- literally? He was so short that his Hush Puppies wouldn't reach the gas pedal. (No kidding -- he raced in Hush Puppies.)

Car owner Smokey Yunick compensated for Andretti's, er, shortcomings by building a longer gas pedal. And once the 1967 Daytona 500 started, Andretti stood tall, just as he had racing Indy cars. He mashed the pedal to the floorboard and kept it there for 500 miles. Andretti dominated the field, leading 112 of the 200 laps.

But the biggest winner that day was NASCAR. In Victory Lane, a giddy Andretti proclaimed: "You don't baby a car at Daytona like you do [in Indy cars] at Indy [Indianapolis Motor Speedway]. It's flat out."