What were the stock car tire wars? 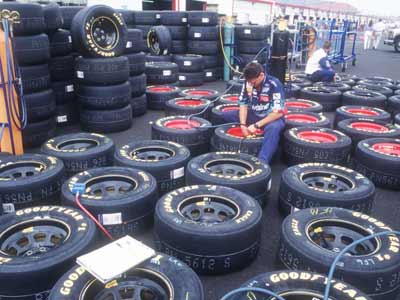 ­When you think of stock car racing, you might think of certain racers, sponsors and famous races that take place throughout the year. What you might not give a lot of thought to are the specifics of stock cars, such as the tires that go on every car. There are many tire manufacturers in the United States, so it seems logical to think that stock car racers have a choice. However, this is not the case. All stock cars must use the exact same tires from the same manufacturer so that no racer has an advantage over another. That means only one tire manufacturer supplies NASCAR with tires. And sometimes there's a war to determine which manufacturer has the privilege [source: Siano].

The last stock car tire war in the United States took place in 1994. Up to that time, Goodyear was the tire giant for NASCAR. Hoosier Tire stepped in to recruit a few racers to use their tires, which led both companies to produce faster and better tires. At the end of the year, Hoosier gave up the fight, and Goodyear became the giant again [source: McGee].

­A tire war in the stock car world is a little different from a war between countries, but the goal is usually the same. No guns and no guerilla warfare, but both tire manufacturers have the goal of asserting their presence in the stock-car scene. As the go-to tire manufacturer for all stock cars, your name can be advertised to all the people who have any interest in NASCAR. Many of those fans will most likely have an interest in regular cars, too, so your company's name might be the first to come to mind when they look for their own tires.

­Some critics wonder if there is another tire war in the making, since the last war took place more than fifteen years ago. Firestone has been testing stock car tires, and many wonder if they will be competing against Goodyear. NASCAR must abide by their contract with Goodyear until 2011 [source: Engle].