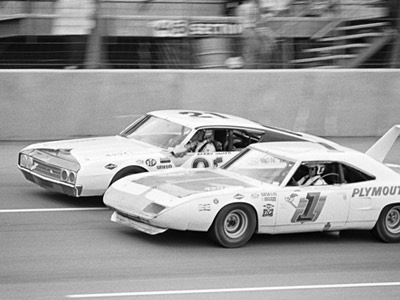 Generally referring to NASCAR season 1969-1970, warring for the most aerodynamic car was an intense rivalry between race car makers.
Alvis Upitis/­Getty Images

­When the sport began, stock car racing involved driving an automobile that had not been altered from its original factory form. Therefore, essentially, you could own and drive the same car as your favorite NASCAR contender. Most other race cars, however, were built for the s­ole purpose of racing, not for everyday use [source: Economic Expert].

Stock Car racing rose in popularity in the 1960s and provided the auto industry with a great opportunity to advertise their stock. It became clear that the more successful a car was on the track, the more successful it would be on the showroom room floor. Winning races meant sales would increase and so, the aero wars were born.

­As the major names in automobile manufacturing recognized the chance to increase their sales, they put factory time and money into creating aerodynamic cars that would -- or so they hoped -- cruise past their opponents and later, end up in your garage.

While many of the already successful car corporations were experimenting with aerodynamics, the "aero war" itself usually refers to the two biggest companies, Ford and Chrysler. These corporations truly went head-to-head with each other to be the best name in stock car racing.

The more effort the corporations put into building cars specifically for stock car racing, the more they began to differentiate from the cars of the average American family, not only in price, but also in safety and practicality. At the same time, the race scene was changing as Chevy and Ford began to dominate the tracks.

By the early 1970s, NASCAR's current president, Bill France, didn't like what he was seeing. He mandated a maximum engine size for the aerodynamic frames that was almost 25 percent smaller than what they were currently using [source: Gladden]. This meant the aerodynamic cars would have smaller (and less powerful) engines than their non-aerodynamic competitors, evening out the playing field and ending the aero wars.

These rules were put in place not only to make the race more even, but also to protect the safety of the drivers and the integrity of what stock car racing was supposed to be. The current models of that time just weren't practical for the average American anymore.

The time of the aero wars was when the sport truly began to evolve into what it is today. That Camry in your driveway might not be the same as Mike Wallace's #7 GEICO-sponsored Camry, but NASCAR has made efforts to keep the original values of stock car racing in mind, mandating just how far car manufacturers can go when producing their track stock.