Browse the article How does downforce help a NASCAR race car? 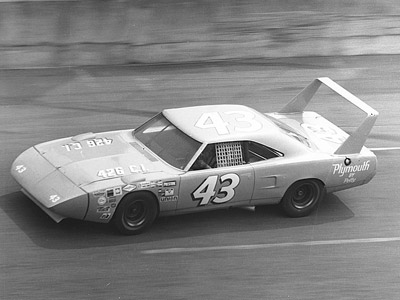 ­If you really want to learn about downforce in NASCAR racing -- and we're guessing that since you're reading this article,

you do -- one logical place to turn would be to NASCAR itself.

In fact, NASCAR has collected a rather handy glossary of common racing terms, including one for downforce. It basically states that air pressure moving over a race car's various surfaces creates "downforce" or increased weight. And while downforce increases tire grip and cornering speeds, there's a significant tradeoff -- greater downforce also increases drag, which reduces straightaway speeds [source: NASCAR.com].

­In the past, NASCAR teams were able to run wildly different vehicles. As a matter of fact; each participating manufacturer had its own somewhat unique and recognizable appearance. In recent years, however, NASCAR has attempted to even the playing field by standardizing the body shape race teams are allowed to bring to competition. As a result, the bodywork of every NASCAR Sprint Cup race car is identical regardless of the manufacturer -- with the exception of the paint, of course.

NASCAR's Car of Tomorrow is the current design used exclusively in NASCAR Sprint Cup races. The design increases safety for the driver as the cars go faster and faster each year. But as the speeds increase, for safety's sake, the downforce has to increase as well. The additional downforce increases drag which acts to slow the car down.

­Does this seem like a never ending battle of physics? Well, it is. So we'll take a look at these forces, as they relate to a NASCAR race car, on the next page. 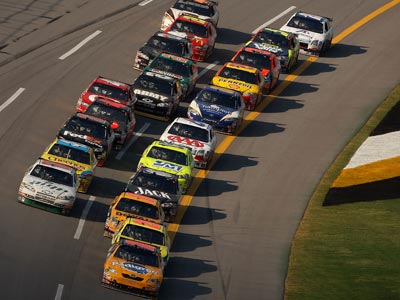 In NASCAR, nose-to-tail racing leaves no room for error by any driver.
Chris Graythen/Getty Images

­­Similar to the way that geometry and billiards are closely related, there's a lot of physics involved in NASCAR racing -- or any form of auto racing, actually. If you want an easy way to remember a few of the key factors in NASCAR, just remember the three D's -- downforce, drag, and drafting.

Downforce is created by the air moving over the top of the car and pushing it down toward the track surface. Downforce increases drag. Drag is the resisting force the vehicle experiences from air pushing against it and the additional weight that downforce creates. Drivers can lessen the amount of drag that they experience on the race track by drafting. Drafting is when Driver B tucks the nose of his car almost underneath the rear bumper of Driver A's car to improve air flow over both cars. Sometimes you will hear this maneuver called "running nose-to-tail."

When it comes to sticking the tires to the track in the turns, downforce is definitely the most important of the three D's. But downforce isn't quite as important on the long, straight stretches of pavement that immediately follow the turns. That's where drivers want slightly less downforce and as a result, slightly less drag, too. It's a delicate balance, really. An absence -- or even a significant reduction -- of downforce might cause the car to lift off of the track surface, sort of like an airplane taking off. So how does the design of a NASCAR prevent this from happening?

The front bumper of a NASCAR race car is very low and also wide. It's really more of an air dam than a bumper. It directs the moving air over the top of the car rather than underneath. This creates an area of low pressure underneath the car and an area of high pressure on top of the car. This is called negative lift, and it's exactly the opposite of how an airplane works. Where the air pushes up on an airplane wing, it pushes down on a race car.

The idea is to get most of the air to flow over the top of the car to maximize downforce. That's where the front end fascia comes in. The nose of the car is as low as possible and the front fenders are flared wide to push the air up and over the car.

The problem, as you may have already figured out, is that this low nose with flared fenders presents a lot of front surface area to push through the air. As you can imagine, this creates a lot of drag is created. If you want a first hand demonstration of what drag is, the next time you're on the highway, try sticking your hand out of the car window with your palm facing forward. That's what drag feels like. Next, tilt your hand 90 degrees so your palm faces the road. You'll feel the difference immediately. With less surface area facing the wind, the air can slip around your hand, allowing it to cut through the air much easier. You can also vary the angle of your hand to cause lift (causing your hand to rise) or downforce (causing your hand to dip). So, drag is easy enough to fine tune with your hand, but what about fine tuning an entire race car? Especially one that travels at speeds at or near 200 mph (322 km/h) on varying track surfaces and in varying weather conditions.

­Balancing downforce and drag within the confines of the NASCAR-sanctioned car body is a trick the teams simply have to deal with in the best way they can. One way teams make the most of these on-track forces is by bringing the third D into the mix -- drafting. Up next, we'll take a closer look at drafting. 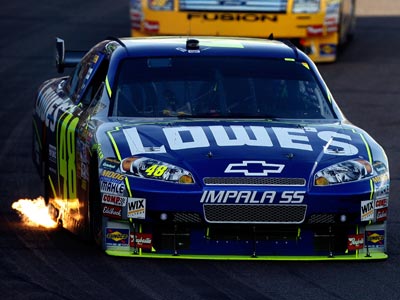