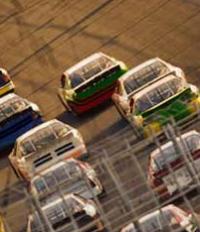 Impound races require the set-up of the car not to be changed during the race. See more NASCAR pictures.
David Madison/Digital Vision/Getty Images

Before impound racing, NASCAR knew it had to find a balance between drivers who could afford to use one setup to qualify in a race and another in the actual race, and drivers who had to make do with a single setup. Implemented in 2005, the impound rule dictates that a car's setup cannot be altered between the qualifying competition and the actual race. Once a car has qualified and been inspected, crewmembers are not allowed to perform any work on it. The car has to be parked in the garage (impounded) and left alone until the race [source: Siska]. Though the idea was to enhance competition, the changes weren't ideal at first. Teams felt that having the cars impounded made schedules more confusing and race day more hectic. NASCAR eventually addressed these problems and relaxed the rules to some degree.

­So, why exactly did NASCAR start impounding cars? What problems arose at the outset of implementing the impound rule? What restrictions are placed on crewmembers while the car is impounded? And, is there any way for a driver to bypass the one-setup rule? Read on to find out.

Reasons for Having Impound Races

­Though opinions on impound racing can be mixed, NASCAR officials put a lot of thought into its implementation. Rule changes are never quick and easy -- it takes time to explain and enforce the new rules, so NASCAR didn't formulate the impound rule without reason.

According to NASCAR, implementing impound races was a way to keep racing teams focused on the best setup for the race and to enhance competition. The idea was, and still is, to make racing a level-grounded sport, ensuring that teams with little money can compete with well-funded teams. Impound racing was seen as a way to curb expenses and save money. By impounding the car, a team is relieved of the need to have a qualifying setup and a race day setup.

It isn't unusual for a high-dollar team to have two complete setups. One setup is used to qualify, and then the team tears down that setup and rebuilds it for the race [source: Shinzawa]. Not only is this practice expensive, but some feel it takes away from the sport. When doing this, teams can build setups meant to make their car better at qualifying, but not necessarily ensure they will perform well at the race [source: Siska]. But with the impounding rule in force, the car is already built for the race when it goes through the qualification trials.

Now, let's look at the different types of restrictions that are placed on teams during impound races.

Inspections are performed in order of standing. If you're first in point standings, then your car is inspected first. If you are farther down the list, you might have a while to wait for your car inspection. The problem is, if you're at the far end of the line and have any issues that need to be fixed, it's possible for you to miss the first practice [source: Waltrip]. These days, NASCAR has changed the order of practice and qualifying races for impound events, so drivers now have two practices on Friday and the qualifying run on Saturday [source: Siska].

Once a car has finished qualifying, NASCAR imposes impound restrictions. After the car has entered the garage, only two crewmembers are allowed to stay in the garage.

The only exception to the "no work once the car has been qualified" rule is if the crew is able to get prior approval from NASCAR, which is granted only under special circumstances.

On race day, NASCAR impound rules dictate that two crewmembers are allowed back in the garage, accompanied by a NASCAR official. Crewmembers may not:

Though some drivers and racing fans may feel the restrictions make impound races seem unfair, NASCAR does include some allowances in the rulebook. Next, up, you will learn what crew members can do after a qualifying race is completed.

If crewmembers decide to make changes to the car once the qualifying inspection is completed, they will have to start at the back of the line on race day. Once a race begins, crewmembers could perform a lightning fast changeover from a qualifying setup to a racing setup, but they would want to perform this changeover as close to the beginning of the race as possible to give the driver time to catch up [source: Warren].

After the qualifying race and inspection, the crewmembers are required to put the car into the garage while under the watchful eye of a NASCAR official. The two crewmembers that are permitted to remain in the garage are allowed to:

NASCAR also has strict limits on the amount of fuel that can be added to a car:

If you would like to learn more about NASCAR racing and related topics, visit the links on the next page.

How NASCAR Tire Technology Works
How NASCAR Works
What is a stock car?