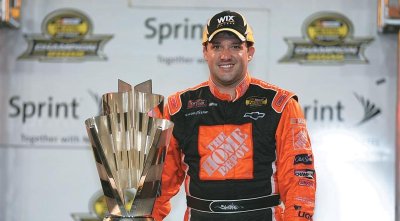 Tony Stewart's intense work ethic and exuberant showmanship has made him one of NASCAR's most promising young drivers. See more pictures of NASCAR.

Tony Stewart's rookie season in 1999 was one of the most eventful in the history of NASCAR racing. The 27-year-old from Rushville, Ind., finished fourth overall in the championship chase on the strength of three wins (all in the season's second half), 12 top-five finishes, and 21 top-10 showings. On May 30, he raced in two events on the same day, finishing ninth in the Indy Racing League's Indianapolis 500 and fourth in NASCAR's Coca-Cola 600 at Lowe's Motor Speedway.

In 2002, Stewart rallied from a last-place finish in the season-opening Daytona 500 to scramble back into contention. He delivered a late-season kick to capture the 2002 NASCAR Winston Cup championship. He nabbed the title again in 2005 after racking up five wins, as well as 17 top-five and 25 top-10 finishes.

Even in 2006, when a bit of bad luck kept him out of the Chase for the NASCAR NEXTEL Cup, Stewart managed to post five victories, including three during The Chase when the focus was on the ten Chase drivers.

Stewart's quick success in NASCAR's Premier Series is not surprising, given his racing history. He cut his teeth on go-kart racing at a young age, snagging his first championship title when he was eight years old. He moved up the open-wheel ranks of three-quarter midgets and then on to the USAC (United States Auto Club) series.

In 1995, he became the first driver to sweep the USAC Midget, Sprint Car, and Silver Crown championships. In 1996, Stewart entered the newly formed IRL (Indy Racing League), where he claimed the Rookie of the Year title and followed that up with the IRL championship the following year. Stewart hooked up with Joe Gibbs Racing in 1997, running in NASCAR's Busch series before moving with Gibbs to NASCAR's Premier Series.

Stewart's NASCAR career has been undeniably successful but also volatile, with a notable number of scuffles with other drivers and trackside photographers. This hot-tempered personality has earned Stewart a bit of a "bad boy" reputation, as well as some punitive fines from NASCAR officials. Stewart's positive emotions are equally unrestrained. Stewart has brought a new level of boisterous showmanship to the traditional NASCAR victory celebration, with such antics as smoke-billowing burnouts and fence climbing.

In addition to a grueling racing schedule, Stewart maintains an incredibly hectic lifestyle, busying himself with such diverse ventures as his own dirt track (Eldora Speedway in Rossburg, Ohio), his own World of Outlaws sprint car team, the Tony Stewart Foundation charity organization, even his own line of "Smoke"-branded merchandise. On the track or off, Tony Stewart's life is nothing if not eventful.