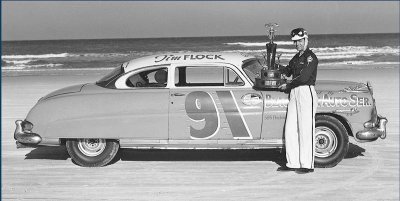 Tim Flock followed in his siblings' footsteps on the NASCAR circuit. See more pictures of NASCAR.

Rookie NASCAR drivers have to pay their dues, but perhaps no other driver endured the on-the-track training that Julius Timothy Flock had to encounter. Flock, the 1952 and '55 NASCAR Grand National champion, was the youngest of the Flock clan, the most famous family in the early days of stock car racing. Older brothers Bob and Fonty, plus sister Ethel Flock Mobley, all drove in NASCAR Strictly Stock and Grand National competition.

"I ­worshiped Bob and Fonty when they were ­driving," recollected Tim. "But they said I'd never be a race driver. I always tried extra hard to beat Fonty on the track because he wouldn't let me race as a kid."

Despite the objections of his older siblings, Tim was determined to squeeze his way into the sport of speed. When he was 18, Flock went to a Modified race at North Wilkesboro and talked Bruce Thompson into letting him drive his car. "It seemed like everyone bumped into me, and I was glad the rear end finally froze up and I had to quit the race," said Tim.

Finally convinced Tim was going to become a race car driver, Bob and Fonty decided it would be best to tutor their younger brother in the arts of racetrack survival. "They took me out to the old Lakewood track in Atlanta and showed me all the tricks," remarked Tim. "They would knock me through the fence -- just to demonstrate how it was gonna be and that I'd just have to deal with it. I learned quite a bit in a short period of time."

Flock hooked up with team owner Ted Chester and won the 1952 NASCAR Grand National championship. In '53, Flock was again a contender for the title until an unusual accident laid him up for several weeks. "We had raced in Syracuse, N.Y., on July 3 and had to race again the next day in Spartanburg, S.C." said Flock. "After we arrived in Spartan­burg, I laid down in the infield to catch a few winks. We had driven all night from Syracuse and we were plumb wore out. Next thing I knew there was an automobile tire -- with the automobile attached -- parked on my head. A spark plug representative hadn't seen me. He accidentally backed over my head. I was out of action for most of the remainder of the year."

When he came back in 1954, Flock finished first in the NASCAR Grand National at Daytona's Beach-Road course, but was disqualified when NASCAR officials determined his carburetor wasn't stock. Flock quit racing in disgust, headed back to his hometown of Atlanta, and operated a gas station. "I went flat broke doing that," Tim said.

For 1955, Flock returned to NASCAR to drive Chryslers for Carl Kiekhaefer. Flock enjoyed a phenomenal year, winning 18 races and 18 poles, both records at the time. He easily captured his second NASCAR Grand National championship.

In early 1956, Flock bailed out of the Kiekhaefer team, citing health reasons. "I had ulcers real bad," said Flock, "and I couldn't take Kiekhaefer's drill-sergeant attitude anymore. I had to quit to save my own life."

Flock was only a part-time participant in NASCAR for the remainder of his career. His final victory came on the road course in Elkhart Lake, Wis., beating the Kiekhaefer team in their own backyard. In 1961, Flock was booted out of NASCAR by Bill France for assisting Curtis Turner in his efforts to organize the drivers to join the Teamsters Union. When the ban was lifted in '65, Flock decided against resuming his career.

Why is camber so critical in NASCAR?
Are all stock car tracks the same?
How Stock Car Painting Works