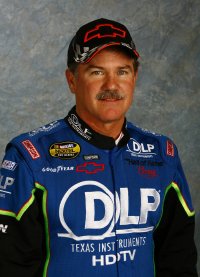 In the summer of 1978, Terry Labonte was driving Sportsman cars on the short tracks in and around his hometown of Corpus Christi, Texas. In August, NASCAR team owner Billy Hagan, who had just released 1976 Rookie of the Year Skip Manning, decided to give the 22-year-old kid a shot at the big time.

Darlington's Southern 500 was the next race on the annual NASCAR Winston Cup Grand National calendar. Eerie Darlington, with a personality akin to an angry pit bull, was hardly the place for a green rookie to attempt his first big-league start. "I had never even seen Darlington before I went there in 1978," said Labonte.

While taking a maiden voyage at Darlington could be considered suicidal, Labonte was up to the task. Driving the Hagan Chevrolet, Labonte was smooth, steady, and fast. Most importantly, he didn't flinch in the face of Darlington's fearsome reputation. The Texas hotshot finished an amazing fourth.

Two years later, Labonte was back at Darlington for the 1980 Southern 500. Starting 10th on the grid, Labonte again ­quietly and effectively drove into contention.

Throughout the 500-miler, Labonte managed to keep his car on the lead lap. Near the end of the race, David Pearson, Dale Earnhardt, and Benny Parsons were engaged in a dogfight for the lead.

With three laps to go, a slower car driven by Frank Warren blew an engine entering the first turn. NASCAR spotters on the scene said there ­didn't appear to be any oil deposited on the racing surface, so the green flag stayed out.

As the leaders charged into the turn, oil on the track sent the cars lurching sideways. Tires smoked, metal crunched, and the three leaders suddenly found themselves in a battle for survival instead of victory.

Pearson overcame a spin and, with tires smoking, headed off the fourth turn toward the yellow flag. Labonte, running at full stride, dove low and passed Pearson a couple of feet before the stripe. He beat Pearson back to the caution flag by less than two feet to secure his first NASCAR Winston Cup Grand National victory as the race ended under the yellow.

With his signature steady driving, Labonte became a contender for the championship by his third full season. He finished fourth in 1981, third in '82, and fifth in '83. In 1984, Labonte overtook Dale Earnhardt for the points lead in August and drove to his first NASCAR Winston Cup Grand National title. He won two races during the run.

A dozen years later, Labonte drove to his second NASCAR championship as a member of the Hendrick Motorsports team. He and teammate Jeff Gordon engaged in a stirring points battle during the final stretch of the 1996 season. With three races remaining, Labonte overtook Gordon and edged his ­stablemate by a mere 37 points.

Labonte set another mark in 1996. With his April 21 start at Martinsville, Labonte broke Richard Petty's record of 513 consecutive starts. The streak extended into the 2000 season when he made his 655th consecutive NASCAR Winston Cup start at Daytona in July. A wreck at that race forced him to miss the Aug. 5 race at Indianapolis. Labonte's streak, which ­started in 1979, was surpassed by Ricky Rudd in 2002.

Labonte decided to hang it up after running a part-time schedule in the 2006 season. Consistency and an "iron man" mentality made Labonte one of NASCAR's top drivers for the almost three decades.