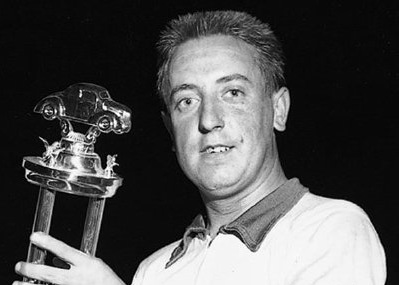 He didn't look like a man who could wrestle a speedy automobile around NASCAR's high-banked tracks, nor should he have been one. As a child, White was stricken with polio, but the little guy with the big heart didn't let the one-time crippling disease slow him down.

At the age of 25, he went racing for the first time in the Sportsman division at West Lanham Speedway in Maryland. He was sidelined by engine problems in his initial outing, but from then on, he was a force to be reckoned with. He went on to win the Sportsman champion­ship at the 1/5-mile high-banked oval in his rookie year.

Seemingly a natural on short tracks, White served a two-year apprenticeship on the small ovals near his home in Silver Spring, Md. In 1956, he came south, set up base in Spartan­burg, S.C., and began his personal quest to win the NASCAR Grand National title.

Rex Allen White started 24 races in '56 and finished in the top 10 on 14 occasions -- very impressive stats for a rookie in the big leagues of stock car racing. He also finished second in the final NASCAR Short Track standings, an offspring from the NASCAR Grand Nationals.

In 1959, White missed out on the Short Track championship by just two points to Californian Marvin Porter. It was the closest championship battle in NASCAR late-model history.

In the winter of 1959, White, who ran his own operation, hired Louis Clements to be his chief mechanic and crew chief. "He's the best in the business," White said at the time. "I felt I needed a man like him to win the championship."

White offered Clements an unusual deal to keep his motors humming over the long haul of the season. After expenses, White split all the profits 50/50 with Clements. White owned the car and drove it, but paid Clements an amount equal to his own salary to keep it running with the leaders and in tip-top condition.

In 1960, White won six NASCAR Grand National races and claimed the champion­ship. His earnings, after the points fund had been paid, came to a then-record $57,524.85.

The 1961 and 1962 seasons were banner years for White, who won 15 times and finished second and fifth, respectively, in the points standings. In the '62 season finale at Atlanta International Raceway, White won the only superspeedway race of his career.

Driving an underpowered Chevrolet in the days when Pontiac and Ford reigned supreme, White kept his chariot in the hunt all afternoon. With just three laps to go, he edged into the lead for the first time. He managed to hold off Joe Weatherly to snare the winner's prize of $10,315.

White's lone big-track win was also the final win of his career. Racing only part-time in 1963, he finished in the top 10 in 14 of 25 starts. White did well enough to finish ninth in the final NASCAR Grand National points standings.

In 1964, while driving a Mercury from the Bud Moore shops, White suddenly retired from NASCAR racing. The reason for his retirement remains a mystery. It is speculated that he was concerned about the escalating speeds and increasing element of danger.

Nonetheless, he went out at the top of his game. In his final two starts, he finished third in Charlotte's World 600 and fifth in the Dixie 400 at Atlanta. In his final effort, he was the fastest qualifier at 146.024 mph.

White won 28 NASCAR Grand National races in his 233 career starts and retired while at his prime at age 35.