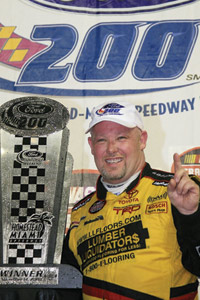 Though Todd "The Onion" Bodine has stopped racing in one of his three NASCAR circuits, the Nextel Series, he has not given up on his competitive nature. Now as the host of the annual Geoff Bodine Bobsled Challenge in New York, Bodine said that racing is all about the competition. Whether he is racing in a stock car, truck or an unconventional bobsled, Bodine acknowledged that the driving force of most race car drivers is their desire to win [source: Seattle Times].

Bodine helped his family at their Chemung Speedrome by working there when he was young. Though he grew up in a family of drivers and racetrack owners, the racing bug did not infect Todd Bodine until he was 13 years old. Seeing his older brothers Geoff and Brett race was an inspiration to him to get behind the wheel himself [source: Team Onion].

­Bodine then jumped into the driver's seat ­of a car for the Sprint Cup Series in 1992. Over the course of the 15 seasons Bodine raced in the Winston/Nextel Cup Series, he fluctuated between full and part-time racing.

What were the stock car aero wars?
How NASCAR Broadcasts Work
The Top 10 Daytona 500s Ever