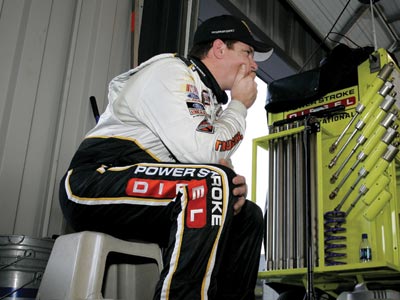 Who says you can't teach an old dog new tricks? Terry Cook has been a NASCAR Craftsman Truck Series driver for almost 15 years. Yet, in 2008, Cook earned the Featherlite "Most Improved Driver" title. Since his introduction to the NASCAR Craftsman Truck Series in 1996, Cook has proved to be a force to contend with, even as up-and-coming stars join him on the track. And it doesn't look like he will give up his reins anytime soon [source: USA Today].

Before Cook joined the NASCAR Craftsman Truck Series, he started his competitive racing career in 1987 in the Late Model Sportsman division. This division raced at the Flat Rock, Michigan and Toledo, Ohio speedways. It was in this division that he accumulated 11 feature wins for the 1987 season. He was similarly successful in the 1988 season.

In 1992, he was the champion for the Super Late Model Division Track at the Toledo Speedway. He held the same honor in 1995 at the Sandusky Speedway. It was then that Cook's success took him to the next level, and in 1996, he joined the NASCAR Truck Series. Two years later he earned his first NASCAR Craftsman Truck Series win at Flemington Speedway [source: Toyota]

­Cook kn­ows the importance of good relationships. He joined Harris Trucking Motorsports for the 2007 season, but Wyler Racing picked him up for 2008 as the No. 60 Toyota driver until they let him go in October 2008. Because Wyler Racing released Cook, his good relationships with HT Motorsports allowed him to take over the No. 59 Team ASE/HT Toyota Tundra and finish out the season.

This sponsorship swap is something that Cook cited as a downside to his career choice. Especially as a veteran driver, Cook has seen that oftentimes drivers cannot count on what team they will be racing for race-to-race and season-to-season. The faltering economy is to blame for making sponsorships particularly difficult to come by for the NASCAR drivers this season and last [source: ESPN].