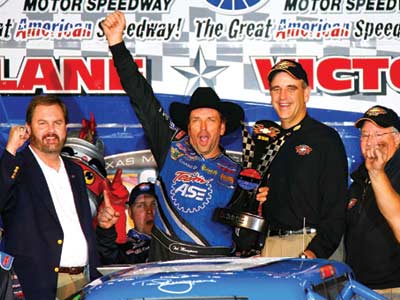 Ted Musgrave has been behind the wheel of many different vehicles and has participated in each of the three major NASCAR racing divisions. His longest career was in the Winston Cup Series, where he raced from 1990 to 2003, though only full-time from 1991 to 1999.

He raced intermittently as a part-time racer in the Busch Series during 1989, 1995, 1997, 1999, 2000, 2003, 2004 and 2006. The Busch Series did not prove to be the most successful of Musgrave's career. However, Musgrave was intent on finding the right outlet for his racing needs and the Busch Series provided just another opportunity. In his eight years of Busch Series racing, Musgrave got one top five placement and two top 10 placements [source: Racing Reference].

Musgrave was the most financially successful in his career as a Cup Series driver. He had 20 top-five placements and 55 top-10 placements. He made five poles.

­Musgrave was set to compete in 2008's Qwik Liner Las Vegas 350, but before he was even able to race, ASE/Harris Trucking Motorsports announced that September 20 would immediately mark the end of their partnership. The reason for this immediate rift in the relationship between HT Motorsports and Musgrave was due to Musgrave's practice session wreck. After a team official blamed Musgrave for wrecking on purpose, Musgrave quit the team. For the remainder of the 2008 series, Musgrave was without a team for the NASCAR Craftsman Truck Series [source: Demmons].