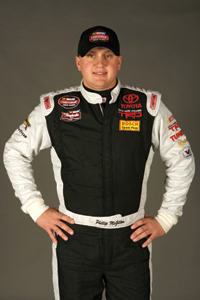 Phillip McGilton may not have started racing as early as some of his contemporaries, but he wasn't wasting his time either. By the age of 25, McGilton created PJM Enterprises, and in fewer than five years, he expanded it to include six companies that employ more than 100 people. The businesses are involved in everything from commercial construction to motor-sports to educational ventures [source: PJM Enterprises]. It is hard to believe that while making his company such a success, he found time to explore racing. But explore it he did, and by 2006, he realized that he was done with amateur racing and ready for the professional venues.

Since his debut in the Automobile Racing Club of America (ARCA) RE/MAX Series at a Michigan International Speedway event in 2006, McGilton has been turning heads in professional racing. He entered a few select races in 2006 before he dove in with a full schedule in 2007. The level of success he achieved in his first year and a half was very impressive. In 29 starts, he managed two top-five finishes, and nine top-10 finishes. He also managed to snag the second starting position in two races. At the end of 2007, he was ranked sixth in overall points [source: PJM Enterprises].

­After his impressive first full season, McGilton ended up signing with Bill Davis to race the No. 22 truck in the NASCAR Craftsman Truck Series. Continuing­ his successful streak, 2008 was an impressive year by anyone's standards. In his first full season in the truck series, McGilton managed a top-10 finish and ended in 12th place in overall points [source: PJM Enterprises].

Unfortunately, at the end of the 2008 season, McGilton's sponsorship fell through and it was announced that he was no longer the driver of the No. 22 truck, at least temporarily. However, McGilton remains hopeful that he can maintain his ties to his sponsor and rejoin his teammates in the future [Source: PJM Enterprises].

Did NASCAR Really Start With Bootleggers?
Why are green cars considered unlucky in NASCAR?
How Stock Car Aerodynamics Work