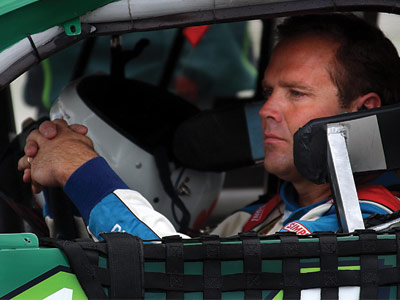 ­Mike Wallace joined a short list of veteran racers during the 2008 season when he started his 600th career NASCAR race. With that many starts and the success he's had, it's no wonder that Wallace has accumulated more than $17 million in winnings [source: NASCAR]. Of course, this doesn't shock anyone who's familiar with the Wallace racing family. His brothers Rusty and Kenny have also gained fame in the world of NASCAR.

Wallace's long and illustrious career began in 1990 with a race in the NASCAR Nationwide series. He placed sixth and never looked back. His first win came four years later in the same series. It was a season that brought him two more wins for a total of three. He also had six top five finishes and nine top 10 finishes that year. In 2001, Wallace started 37 races and racked up a whopping $2,189,935 in winnings [source: NASCAR].

Wallace may, however, be best known for his July 2, 2004, victory in the Winn-Dixie 250. Not only did he go from fifth to first on the final lap of the race, but he handed GEICO its first NASCAR Busch Series victory.

As of 2008, for the past 25 consecutive seasons at least one of the Wallace brothers has taken the green flag at the Daytona 500. It is a streak that Mike is confident will not end in 2009 [source: NASCAR].

What were the stock car aero wars?
What are marbles and why do NASCAR drivers try to avoid them?
How NASCAR Safety Works