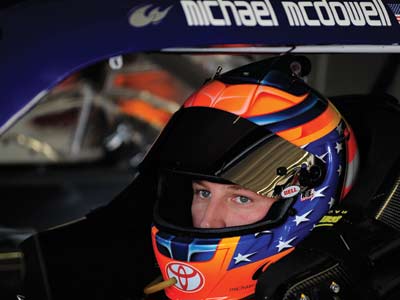 Though he might be just out of his rookie year of NASCAR, Michael McDowell has already made big headlines and managed several national television appearances -- The Today Show, MSNBC, Inside Edition and The Ellen DeGeneres Show. Sounds pretty good for the young driver, until you learn that McDowell's headlines are the type that most drivers try to avoid.

McDowell's biggest splash on the NASCAR scene came neither from a spectacular win (he has none so far) nor a tight, exciting race. Instead, McDowell's spotlight stems from his 2008 crash. McDowell was traveling at 170 mph (270 kph) at the Texas Motor Speedway when he lost control of his car. It hit the wall, rolled over at least eight times and then burst into flames. Veterans and spectators alike called the crash horrific, saying it was one of the worst they had seen in decades [source: Springer]. Miraculously, McDowell literally walked away from the crash. Landing back on all four tires, McDowell got himself out of the car and walked to the waiting ambulance.

­Though McDowell was quite ­lucky in that crash, his luck seems to have -- at least temporarily --run out. His lack of any notable NASCAR finish led to some time off in 2008 to regroup. Eventually, his team decided to pull him for the rest of the season, and he has yet to race again in 2009. Though McDowell had a lot of past success in Automobile Racing Club of America (ARCA) events before the leap to racing's highest level, he has yet to see that kind of success in NASCAR. Only time will tell if wins or wrecks are what McDowell will be remembered for.