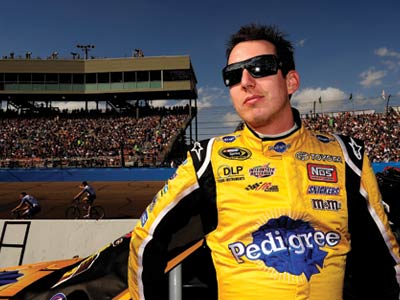 ­Kyle Busch, born in Las Vegas, was destined for bright spotlights and fast times. Even at his young age, despite some detractors, Busch has earned himself a cushy spot in the NASCAR Nextel circuit. His skills as a racer have made his name one of the most recognizable and well known names in NASCAR today. Many people also look to Busch as one of the few strongholds for the future of the motor sport.

Stock car racing was not wholly unfamiliar in Busch's family, considering his older brother drove for Rousch Racing. Kurt, Busch's brother, was a big inspiration to B­usch's involvement in the motor sport. In fact, Busch's first major signing was with Rousch Racing, too.

Eventually, Kyle Busch wanted to separate himself from his brother and make an impression based on his own talent. Busch was able to do so when he signed on with Hendrick Motorsports, a competitor of his brother's team [source: Biography].

­Busch raced part-time in 2004, but signed on for a full-time position the following year. In that season, 2005, he earned the Rookie of the Year title in the NASCAR Sprint Cup Series in addition to placing first two times. Busch holds the record for being the youngest champion in the history of the NASCAR dynasty.

In 2008, Busch began racing the No. 18 ­Toyota Camry with the Joe Gibbs Racing team, sponsored by M&M's Brand Chocolate Candies.

­The awe surrounding Busch has not ­stopped, and it does not seem to be slowing anytime soon. Busch continues to pump up his career statistics with highly successful seasons, making his fans eagerly anticipate each new NASCAR season.

How NASCAR Prize Money Works
What is hypermiling?
How the NASCAR Schedule Works