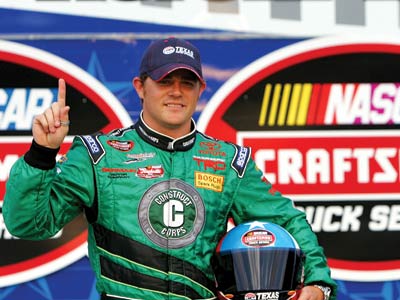 ­Justin Marks loved the sport of stock car racing long before he started competing himself. It was watching the famed Daytona 500 when he was 15, live from the fan stands, that helped set Justin's mind on a future with NASCAR.

Marks started his racing outside the big league of NASCAR, driving Porsches and BMWs in independent racing leagues. He got his foot in the door with some Automobile Racing Club of America (ARCA) racing. And by 2007, Marks was splitting his time between ARCA and NASCAR's Craftsman Truck Series.

Before devoting his life to racing, Marks earned a college marketing degree. He attributes this degree to his success, as he is capable of marketing himself well. Marks has created strong bonds with sponsor corporations, such as Croc's Inc and Construct Corp. Using those sturdy relationships, he set out to find a team and now works under Germain Racing. He's signed on to continue with this team through the 2009 season, staying behind the wheel of his number nine Toyota Tundra.

To date, in Marks' two-season career, he's earned seven Rolex series victories and five Koni Challenge­ wins. In each year, he secured one top-10 finish, finishing in eighth place in both his last race of 2007 and his first race of 2008. Especially impressive for a rookie to the sport, Marks got a pole in one of his first 12 races [source: NASCAR]. In his two years in professional racing, he's begun to make quite a name for himself.

­Still young to racing, Marks is working to master the adjustment from racing cars to racing trucks. The two styles have very different techniques, which is why most drivers specialize in one over the other. But for as short as his career has been so far, he's proven a successful rookie. He went from a 50th ranking in 2007 to 23rd in 2008 [source: NASCAR]. You're likely to hear his name associated with NASCAR for decades to come.