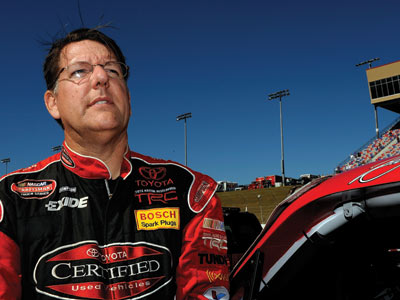 Jonathan Benson, Jr. is best known in the NASCAR racing world as simply Johnny Benson, though some people in the field call him "Mr. Smooth." Benson's father, John Benson, Sr., was not only an inspiration for Benson's given name but also for his career. Benson, Sr., raced for several decades in the smaller leagues around the Midwest. Those smaller racing venues are what Benson grew up with, and he got his first taste of racing on the dirt tracks in the Midwest [source: Johnny Benson].

Benson loves to be behind the wheel on a racetrack, no matter what vehicle he's driving and what kind of track he's racing down. The competition bug caught up with Benson starting in 1982. For seven years, until 1989, his statistics and accomplishments on the racetrack were getting better and better. He set three track records, won 33 heat races and won 23 feature races, in addition to holding 65 top five finishes and 84 top 10 finishes. By 1990, Benson started driving for the American Speed Association (ASA) [source: Johnny Benson].

Benson started competing in the Busch Series in 1994 and won Rookie of the Year. The following year, he captured the Busch Series Championship. Starting in 1996, Benson has since competed in 274 races in the NEXTEL/Winston Cup Series. In addition to the Busch and Cup Series, Benson has also driven in the Craftsman Truck Series full-time from 2005 to today [source: USA Today].

Benson won the 1995 NASCAR Nationwide Series and was Rookie of the Year for the 1996 Sprint Cup Series. Benson's sole stock car win was in the 2002 season for the Winston Cup at Rockingham as part of the Pop S­ecret 400. In 2004, Benson began to slim down on the amount of Sprint Cup racing he did and opted to devote most of his racing attention to the Truck Series.

­The 2008 season was a busy one for Benson even though he did not race once for the Sprint Cup Series. He won accolades as the winner of the NASCAR Craftsman Truck Series championship. At the end of the season, Benson announced that he would end his association with the No. 23 Bill Davis Racing (BDR) team. For the 2009 season, he will drive for Red Horse Racing as the No. 1 Toyota Tundra.

What is the history of stock car racing?
How NASCAR Engines Work
Why is it so hard to understand the NASCAR penalty system?