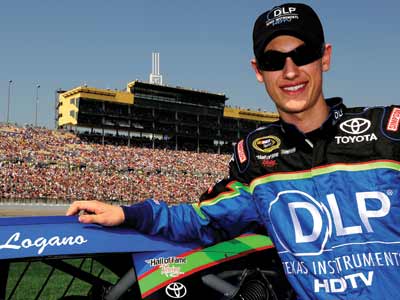 ­Joey Logano is one­ of NASCAR's brightest rising stars. If the nickname "Sliced Bread" doesn't clue you in, he's the next best thing to come around the race track in quite a while. After a prodigious career in various junior and intermediate leagues, in addition to accolades from NASCAR legends like Mark Martin, Logano became the youngest driver ever to win a NASCAR Nationwide series event.

As a child, Logano was successful at just about every level he raced at. Notching victories in the USAR Hooters Pro-Cup Series and the Camping World East Series, Logano made his NASCAR debut in the Craftsman Truck Series' Mountain Dew 250 at Talladega. He was only 17 years old at the time, and though he placed a disappointing 26th, it was his one and only truck series race before moving up to the Nationwide Series [source: Joey Logano Racing].

­On his 18th birthday, Logano became eligible for the NASCAR Nationwide Series, and raced in his first NASCAR stock car race in the 2008 Heluva Good! 200, where he finished in sixth place.

From there, it didn't take long for "Sliced Bread" to continue his ascent up the NASCAR ladder. He followed his Nationwide Series debut by winning pole position at three consecutive events before scoring his first win at the 2008 Meijer 300. It was only his third start in the Nationwide Series, and with the win, he became the youngest driver to win a Nationwide event, beating out the previous record holder, Casey Atwood [source: ESPN].

­After his record breaking win, Logano finished the Nationwide schedule with missteps along the way due to contractual and sponsorship obligations. Logano also missed out on a few races at larger tracks like Daytona due to clearance issues with is young age. However, his career is still rapidly progressing.

­In August, Joe Gibbs Racing announced that Logano would be replacing Tony Steward in the No. 20 Home Depot car in the 2009 NASCAR Spring Series. Since the announcement, Logano has competed in three Sprint Cup Series events, never finishing better than 32nd.

Did NASCAR Really Start With Bootleggers?
Why are green cars considered unlucky in NASCAR?
How Stock Car Aerodynamics Work