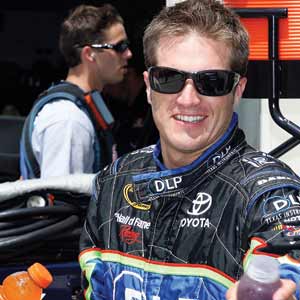 JJ Yeley at the NASCAR Sprint Cup Series Allstate 400 at the Brickyard at Indianapolis Speedway, Indianapolis, IN, July 2008.
Geoff Burke/Getty Images for NASCAR

­J.J. Yeley's father, Arizona Midget Racing Association and World of Outlaws midget legend "Cactus" Jack Yeley, brought J.J. to his first race when he was only three weeks old [source: Yeley Racing Corp]. Given that, you could say his experience with racing started at an early age. Some of his earliest memories are of traveling the United States and spending the days in the grandstands bragging to the other kids that his father was a race car driver. His dad saw his potential, and at an age when most kids don't know anything about how cars work, Yeley was tightening bolts and putting grooves in tires.

Thanks to a forged birth certificate, J.J. Yeley's race career started when he was 14, two years younger than the legal age. At 16, Yeley became the youngest person ever to be issued a United States Auto Club license [source: Yeley Racing Corp]. And he didn't stop there. In 1995, he won his first race at Silver Dollar Speedway in Chico, CA and became the youngest driver to do so. He continued winning and turning heads through 1996, racing in the SCRA and then racing as a rookie in the USAC in 1997.

In 1998, Yeley became the youngest person to qualify for the Indianapolis 500 and he managed to finish in ninth place. He ran three more IRL IndyCar events in 1998 but ended u­p turning all his efforts back to the USAC, and by 2001, he had won his first Sprint Car Series championship.

In 2002, Yeley took home the USAC Silver Crown championship and set himself up for 2003, his most impressive year yet. In that season, he racked up a total of 24 USAC wins, which broke the previous record of 19 set in 1961 by the legendary A. J. Foyt. He became only the second person ever to win the "Triple Crown" when he won the Midget, Sprint and Silver Car championships in the same year. His teammate Tony Stewart was the only other person to accomplish this.

­The year 2004 marked the beginning of his NASCAR Career, where Yeley raced 17 times. His career then took off in 2005 when teammate Tony Stewart was unable to race, allowing Yeley to qualify in the team's back-up car. Yeley, his teammates and team owner Joe Gibbs all point to this incident as the moment when they knew he was able to hold his own in the world of NASCAR.

In 2006, J.J. Yeley was chosen to drive a full schedule in the No. 18 Interstate Batteries car for Joe Gibbs Racing [source: Yeley Racing Corp.]. Although his rookie year didn't post quite the numbers he was accustomed to, he still has managed two top-five and seven top-10 finishes in his NASCAR career. His best NASCAR season to date was 2007 in which he finished with an over-all rank of 21st [source: NASCAR].

Since he's still going strong, it will be interesting to see where Yeley's career goes from here.