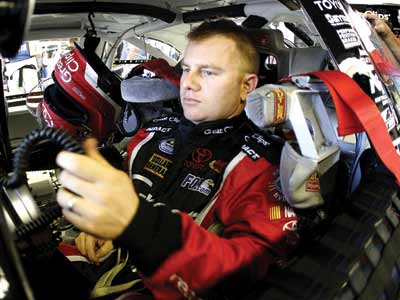 In 1999, Jason Leffler did something that ­hadn't been done in 37 years. He won his third consecutive National Midget title [source: Braun Racing]. He was at the top of his game and the top of the record books. So when you're competitive and at the top of your game, what do you do? Well, if you're Jason Leffler you decide it's time for a new challenge. Leffler found that challenge in the world of stock car racing. It was a decision that would prove to be both fulfilling and profitable.

­After starting only four races in 1999, Leffler burst onto the scene in 2000 nabbing two top-five finishes and four top-10 finishes in 31 races, earning an impressive $438,520 [source: NASCAR]. His success carried over into the NASCAR Craftsman Truck Series for the next couple seasons where he scored his first Truck Series win at Dover International Speedway in 2003.

­Then in 2004, Leffler had the kind of season some drivers only dream of. In 27 starts, he earned 17 top-10 finishes, 8 top-five finishes, and most impressive of all, his first Nationwide Series victory at the Nashville Superspeedway [source: Braun Racing].

­Leffler is now a member of the Braun racing team. He has managed to improve on his success year after year, a fact illustrated by his winnings, which have grown steadily since he made the move from open-wheeled racing to stock cars. In both the 2007 and 2008 seasons, Lefler earned more than $1,000,000.

Leffler's success doesn't come as a surprise to those around him. He inherited his work ethic from his father who labored in the oil fields -- a job much more strenuous than racing, as Leffler puts it. He claims that the best advice he ever got was from his father, who told him to "work hard at whatever you do" [source: NASCAR].

For more information about stock car racing, visit the links on the next page.