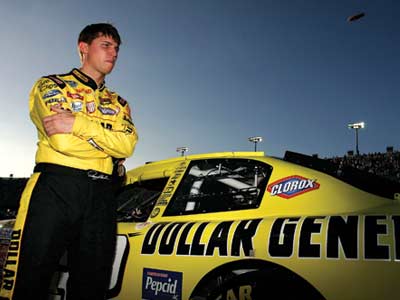 ­Denny Hamlin is a ­relatively new name in the world of NASCAR -- 2005 was his first full season. But don't be mislead; racing is nothing new to Hamlin. He realized his passion for racing early and recorded his first karting win at the age of seven. Hamlin went on to win 127 features over the course of his incredible "karting" career [source: Mitchell]. Not a bad start.

At age 10, he attended an event where he waited in line to meet Joe Gibbs. While Gibbs was giving Hamlin his signature, Hamlin informed Gibbs that he would one day drive a car for Gibbs. Years later, Hamlin stayed true to his word; Hamlin now drives the No. 11 FedEx car on the Nextel Cup circuit for Joe Gibbs' racing team.

­In 2004, Denny Hamlin entered NASCAR's three top touring series and started a handful of races in the Busch and Craftsman Truck Series. In each of those series, he managed a to-10 finish. Then, in 2005, Hamlin raced full-time in the Busch Series. During that season, he earned one top-five and 11 top-10 finishes for an impressive fifth overall ranking. It was also in 2005, that Hamlin made his first starts with future team owner Joe Gibbs. Gibbs recognized Hamlin's talent and entered him in seven starts in the 2005 series to prepare him for a full 2006 schedule. In his seven 2005 NASCAR Nextel Cup series starts, he took home three top-10 finishes and one pole [source: Mitchell].

­The year 2006 brought Hamlin his first major NASCA­R victory when he won the Budweiser Shootout in Daytona. In his first year racing a full schedule for Gibbs, Hamlin also managed to win two other NASCAR Nextel Cup events, sweep both of the Pocono races from the pole position, finish third in series points and take home the honor of NASCAR Sprint Cup Series Raybestos Rookie of the Year.

Hamlin's 2007 ­season was almost as impressive as his first. He took home a victory from the New Hampshire summer race and placed in the top-five 12 times and in the top-10 18 times. And he managed the pole at Martinsville. In turn, 2008 was extremely similar bringing him the exact same number of wins, top-five, top-ten and poles as 2007 but with a slightly better eighth place in points for the year.

In his first four seasons, Denny Hamlin has already established himself as a member of NASCAR's elite. Few doubt that he will be able to continue his success in the many seasons he has ahead of him.

For more information about stock cars and related topics, check out the links on the next page.