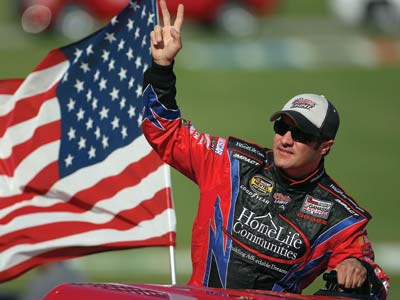 ­Not many people can claim to have won a major stock car race -- especially at the age of 15 driving their mother's car. Although David Stremme can, the officials at the New Paris Speedway disqualified him when they discovered his young age and told him to return when he was old enough to compete legally [source: O'Malley]. He did return, but this time to the Midwestern Short track circuit, and he took home 24 feature wins, two Rookie of the Year awards and two track championships in his first four years.

For Stremme, racing is a family affair. His mother, father, uncle and brother have all raced, not to mention that fact that every member of his family is involved in his racing team.

After taking the short track by storm and making a name for himself in the Kendall Late Model Series, Stremme made it to the American Speed Association (ASA) and was named Rookie of the Year in 2002. In 2003, he was racing with Chip Ganassi Racing, splitting time with Jamie McMurray in the Nationwide Series, where he earned the 2003 Nationwide Series Rookie of the Year award. This was the first time anyone had done so without racing the full schedule.

­His two major rookie of the year awards earned Stremme a full-time racing seat in the No. 22 Nationwide Series Entry. In the 2004 season, Stremme racked up an impressive first Nationwide Series pole position, four top-five and 13 top-10 finishes, with an overall 10th place finish in the standings. The year 2005 brought more of the same with five top-five and 10 top-10s with a 13th place overall finish.

In 2008, Stremme raced with Rusty Wallace's team in the No. 64 car. In that year, he managed five top-five and 16 top-10 finishes for an overall rank of 11th. For now, he'll continue with Wallace's team and continue his impressive career.