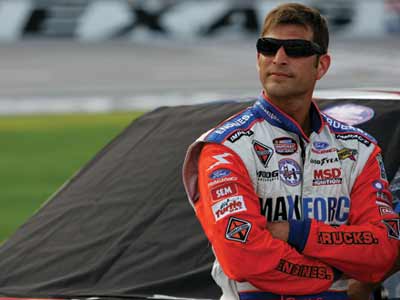 ­After earning his first win in the first year of his dirt track racing, it only makes sense that David Starr would go on to spend more than two decades in racing and more than a decade in NASCAR.

In 1998, Starr began competing in the NASCAR Craftsman Truck Series after years of minor asphalt play. Though at first he was relegated to only select races, he soon proved worthy of becoming a full-time racer. While he's also driven in the NASCAR Nationwide Series, his interest -- and his talent -- seem to remain with the Truck Series. Even though he raced for fewer years in the Nationwide Series, since 2001 Starr has had at least seven notable finishes (a win, top five, or top ten) per season for the Craftsman Truck Series. In his handful of starts between 2000 and 2004 in the Nationwide Series, he neglected to win a single race, finish in the top five or ten, or win a pole [source: CBS Sports].

While he struggled in the Nationwide Series, the NASCAR Craftsman Truck Series has been good to Starr. Though he missed four races during the 2003 season due to injuries, he still finished 13th overall in final point standings. In 2006, he finished the season in fourth place, his best yet. That year also included his career-high lead of 126 laps around the track. Though in 2007, he dropped down to 10th in the final standings, it marked his fourth consecutive finish in the overall top-10 standings.

­Starr and his No. 11 Red Horse Racing Toyota were picked up by Zachry Holdings, Inc. in late 2008. Starr's predominantly white, black and red ­car was subsequently replaced by the sponsor's new black and green one.